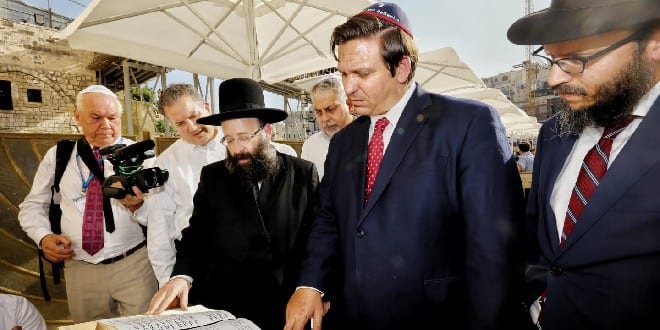 Israel 365: The 2020 Atlantic hurricane season has been the busiest in history forcing meteorologists to resort to labeling storms with Greek letters. But throughout the stormy season, one state, normally receiving the brunt of the ocean storms, has been entirely spared. While experts scratch their heads, some connect this anomaly with the prayers the governor offered in Jerusalem.

When reviewing the stormy season, meteorologists are stunned that none of the landfalls were made in Florida. The only notable exception was Hurricane Sally with up to 30 inches of rain, wind gusts up to 121 mph and storm surge flooding. But Sally’s landfall occurred just across the border near Gulf Shores, Alabama, remaining a mere tropical depression during its time in Florida, ramping up to hurricane intensity after moving away from Florida and moving out to sea. Florida had two other near-misses from storms that later made landfall elsewhere. A storm map shows the Gulf and East coast being affected by storms but the worrisome area shaded in orange surrounding Florida without entering.

When considering Florida’s exemption from hurricanes this season, it is well to look back to last September when Florida Governor Ron Desantis led a delegation of more than 90 leading citizens on a trade mission to Israel. The group included powerhouse lobbyists and business, education and religious leaders.

Before leaving, he inserted a note between the rocks, as per popular custom, with the words, “Good Lord, spare us hurricanes this year.”  Read More

Opinion: “During this trip, we will affirm Florida as the most pro-Israel state in the nation and strengthen the bond between Florida and Israel for decades to come.”

A simple request left in the rock. An ancient prophecy in the process of fulfillment? The 2020 hurricane season ends November 20.