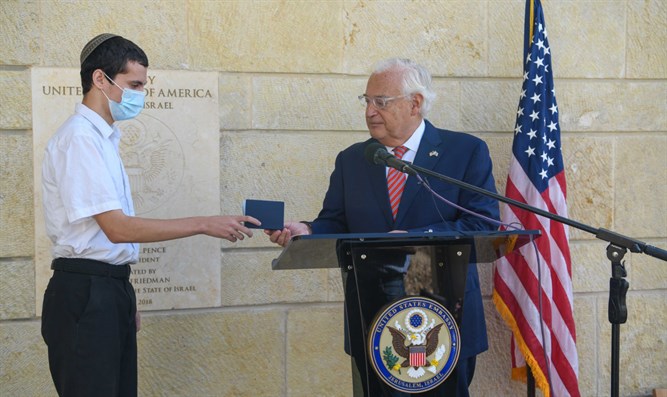 Arutz Sheva: US Ambassador to Israel David Friedman presented the first-ever US passport to list Jerusalem as part of Israel, giving the new travel document to Menachem Binyamin Zivotofsky at a ceremony at the US Embassy in Jerusalem Friday.

Zivotofsky, an 18-year-old Jerusalem-born US citizen, was the center of a nearly 18-year legal battle to secure implementation of the 1995 Jerusalem Act, which instructed the US government to recognize Jerusalem as Israel’s capital city.

While the legal battle culminated in an unsuccessful appeal to the US Supreme Court, which ruled in the 2012 case Zivotofsky v. Clinton in favor of the State Department, and again in 2015 in Zivotofsky v. Kerry, the Trump administration moved to drop the policy of refusing to list Jerusalem as an Israeli city, allowing recipients of official documents, like passports, to choose “Jerusalem, Israel” as their listed place of birth. Read More …

Opinion: “And it shall happen in that day that I will make Jerusalem a very heavy stone for all peoples; all who would heave it away will surely be cut in pieces, though all nations of the earth are gathered against it.” Zechariah 12:3

On September 30, 2016, President Obama spoke at the funeral of former Prime Minister Shimon Peres. A transcript released from the White House listed the location of the speech as:

On their last months in office, Obama/Biden/Kerry and Samantha Power (UN Ambassador), worked with the notoriously anti-Semitic United Nations Educational, Scientific and Cultural Organization to block Israeli access to the temple mount, and make Israeli settlements in Judea and Samaria illegal:

The following series of moves by the Obama/Biden/Kerry team, in conjunction with the United Nations, led to the carefully orchestrated UN Security Council vote just days before Obama left office.

In one final push to harm Israel and support the terrorist Mahmoud Abbas, on January 23, 2017 Obama ordered $221 million US dollars to be sent to the Palestinian Authority as he prepared to leave the White House. Incoming President Donald Trump cancelled the order.

Next Tuesday we will find out if the Obama/Biden policies will continue.