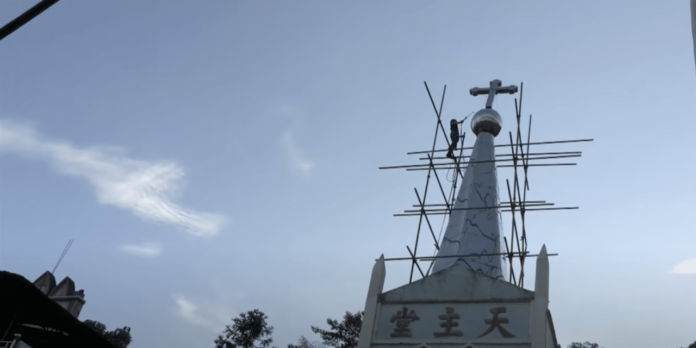 End Time Headlines: A new report from Bitter Winter is stating that Chinese Communist Party officials have ordered dozens of churches in China to replace crosses with the five-pointed star, that of course, is the symbol that is featured on the country’s flag to represent the CCP and its role in the nation.

The report highlights that back in August, the Two Chinese Christian Councils in a county-administered by the prefecture-level city of Jiujiang in Jiangxi Province ordered more than 70 affiliated churches to immediately remove the cross from their official seals and erect the five-pointed star, which is used in all other state-run institutions, in its place. This follows a recent demand that churches remove Chinese characters for “Christianity” from church seals.

“All official churches were ordered to replace their seals so that believers accept the Party as the main leader and follow only it,” a Three-Self Church venue director from Jiujiang said. “The cross is the symbol of our faith, and that is why it has been inscribed in churches’ seals,” another Three-Self venue director said.

“The government replaces it with the five-pointed star to show its power.” These latest orders are all part of President Xi Jinping’s ongoing religious sinicization policy, which requires Christianity and other religions to fully embrace socialism and the leadership of the CCP. Read More …

Opinion: No word yet as to whether the Vatican has re-signed a 2018 agreement authorizing the Chinese government to appoint Catholic bishops, but this October 6 headline pretty much says it all. Ahead of the expected renewal of the Vatican-China deal this month, the former underground bishop of Mindong has announced his complete resignation from public life.

Bishop Guo Xijin, 62, wrote in a letter published by Asia News Oct. 5 explaining that he was retiring to concentrate on prayer because he does not “want to become an obstacle to progress.”

There are 5.7 million Catholics in China that will suffer increased persecutions should Pope Francis re-sign the agreement. Christians all over the world should pray for the truth of the Gospel to lighten the burden caused by this most dangerous pontiff.

“For by grace you have been saved through faith, and that not of yourselves; it is the gift of God, 9 not of works, lest anyone should boast.” Ephesians 2:8-9