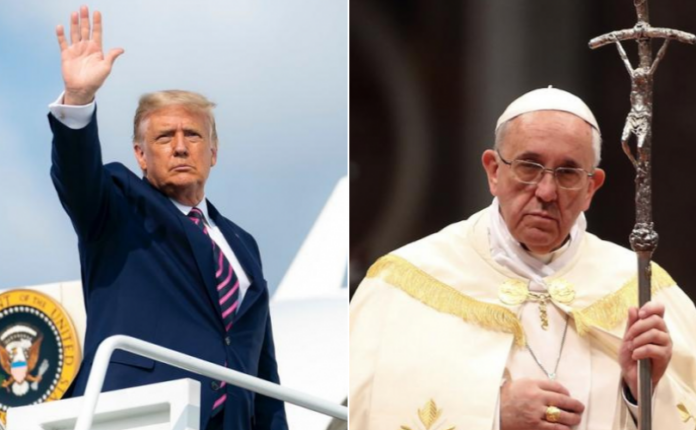 PJ Media: In his new encyclical Fratelli Tutti, the Woke Pope casts aside 2,000 years of unbroken tradition and declares: “Today we state clearly that ‘the death penalty is inadmissible’ and the Church is firmly committed to calling for its abolition worldwide.

That’s just great, but there’s one little catch. In the encyclical he cites and praises al-Azhar’s Grand Sheikh Ahmad al-Tayyeb, who has declared:

“The four schools of law all concur that apostasy is a crime, that an apostate should be asked to repent, and that if he does not, he should be killed.” Apparently Pope Francis now subscribes to the idea of the death penalty for thee, but not for me, all in the name of “dialogue.” Read More …

Opinion: Pope Francis is at it again. He can be confident in the fact that half of his faithful have no idea what the Bible says about the death penalty and the other half is praying for a conservative pope.

That the Old Testament commanded the death penalty for certain crimes…

In the New Testament Jesus showed mercy on a woman caught in adultery (John 8:7), and the great apostle Paul recognized the power of the government to show mercy or institute capital punishment when appropriate Romans 13:1-7.

But there is more. Francis, like all Jesuits, has the primary goal of bringing all religions, including Islam, under the wing of Catholicism. A second Tower of Babel.

What Catholic clergy do not seem to comprehend is that God destroyed the first attempt at global religion at Babel (Genesis 11:1-9) by confusing man’s language, and will destroy the second one at His second coming.

Only one global church, Laodicea, will be allowed to prosper on a very short leash, after which God will cast Satan, the Antichrist, and the False prophet (Rev. 13:11) into the Lake of Fire where they will be tormented forever and ever (Rev. 20:10).