Jewish News Service. Israel Kasnett: The most disingenuous sentence of Obama’s history of Israel is in his description of what happened during the 30 years following Israel’s establishment: “For the next three decades, Israel would engage in a succession of conflicts with its Arab neighbors…”

What? I had to read that sentence many times, because I could not believe that a president of the United States could write such misleading, deceptive and damaging words about his country’s close ally.

Israel did not “engage” in any conflict with the surrounding Arab countries. The Arab armies and their terrorists attacked Israel again and again, and Israelis fought to defend themselves. 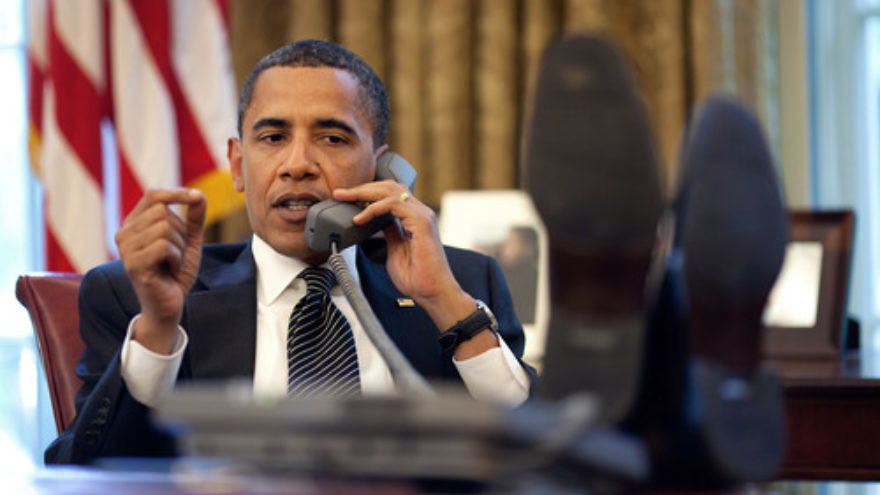 (President Barack Obama, with his feet on his desk, speaks on the phone to Israeli Prime Minister Benjamin Netanyahu on June 8, 2009)

Opinion: Showing the soles of one’s shoes is an insult in the Islamic culture. A shoe is perceived as dirty. Obama was just getting warmed up  …

America’s young president was on a roll. Just 5 days before the shoe incident, Barack Hussein Obama invited the Muslim Brotherhood to his Cairo ‘apology’ speech that opened the way for the Arab Spring just 1 year later.

“On the same day the Lord made a covenant with Abram, saying: “To your descendants I have given this land, from the river of Egypt to the great river, the River Euphrates” Genesis 15:18

When God is left out of a discussion of Israel, dishonest politicians get to make up any and all history that fits their agenda.

When Jacob returned from Mesopotamia, God appeared to him again and blessed him. 10 God said to him, “Your name is Jacob, but from now on it will be Israel.” So God named him Israel. 11 And God said to him, “I am Almighty God. Have many children. Nations will be descended from you, and you will be the ancestor of kings. 12 I will give you the land which I gave to Abraham and to Isaac, and I will also give it to your descendants after you.” Genesis 35:9-12

I do not see any time limit or any Arab Palestinian blood in that covenant.

God did, however, warn His people that their disobedience would result in dispersions from the land.

586 BC: The destruction of the first temple that began the Babylonian Captivity was prophesied to last 70 years (Jeremiah 25:11, 29:19), the amount of time the Jews did not let the land rest on the 7th year.

70 AD: The destruction of the second temple prophesied by Jesus (Matthew 24:1-2), resulted in the scattering (diaspora) of the Jewish people to the 4 corners of the earth that  lasted until May 14, 1948 fulfilling Isaiah 11:11 …

“It shall come to pass in that day
That the Lord shall set His hand again the second time
To recover the remnant of His people who are left,
From Assyria and Egypt,
From Pathros and Cush,
From Elam and Shinar,
From Hamath and the islands of the sea.”

When the Jews returned to the land the 2nd time, the prophecy of Amos 9:15 who was a contemporary of Isaiah, began to be fulfilled. Israel will NEVER AGAIN be removed from the land …

I will plant Israel in their own land, never again to be uprooted from the land I have given them,” says the LORD your God.

Regardless of what dishonest anti-Semites like Barack Hussein Obama say, Jacob is not going anywhere. The descendants of Esau (Palestinians), however, are a different story (Obadiah 1:18).

See our paper 50 Year Timeline: The Rebirth of Israel here