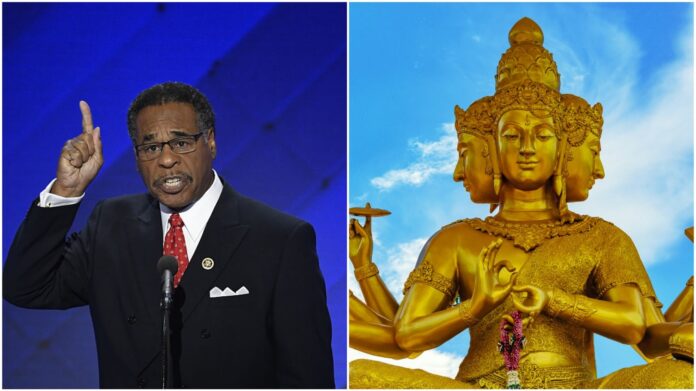 Rep. Emanuel Cleaver (D-MO), who is an ordained United Methodist minister, opened the first session of the 117th Congress on Sunday by praying in the name of a Hindu god and twisting the word “amen” into a commentary on gender.

“Eternal God, noiselessly we bow before your throne of grace as we leave behind the politically and socially clamorous year of 2020,” began Cleaver, who served as the pastor of St. James United Methodist Church in Kansas City, Missouri, from 1972 to 2009.

“We gather now in this consequential chamber to inaugurate another chapter in our roller coaster representative government. The members of this august body acknowledge your sacred supremacy and therefore confess that without your favor and forbearance, we enter this new year relying dangerously on our own fallible nature,” he continued.

Cleaver went on to ask divine assistance during what he described as “a moment when many believe that the bright light of democracy is beginning to dim.” Imploring God to empower the 117th Congress to maintain liberty for future generations, he also asked God to maintain his presence even during times of “heightened disagreement.”

The prayer to open the 117th Congress ended with "amen and a-women."

It's not a gendered word.

Though his prayer was replete with explicitly Christian themes, terminology, and references, Cleaver closed it by appealing to the deities of “many different faiths,” implying they were all the same.

“We ask it in the name of the monotheistic God, Brahma, and ‘god’ known by many names by many different faiths,” said Cleaver.

“Amen and a-woman,” he closed, in an apparent attempt to render the word fair to both sexes. Read More