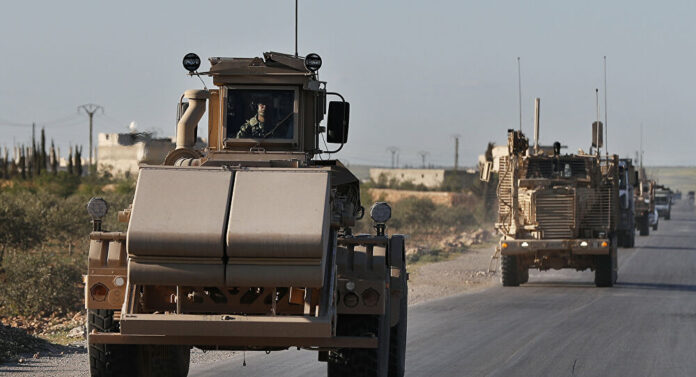 Front Page Mag: “A large US military convoy,” according to i24News, “entered northeastern Syria on Thursday.” Reportedly, the convoy “included some 40 trucks and armored vehicles and was backed from the air by helicopters.” Is Dotty Old Joe planning an American military misadventure in Syria? It wouldn’t be any surprise.

As former President Trump said last September, “the top people in the Pentagon…want to do nothing but fight wars so that all of those wonderful companies that make the bombs and make the planes and make everything else stay happy. But we’re getting out of the endless wars, you know how we’re doing.” Not any more. The drumbeat to get American troops into Syria began almost immediately after Joe was anointed President-elect by the establishment media.

Of course, because of deep state interference in Trump’s presidency, we never really left Syria in the first place. Trump’s former special envoy for Syria, Never-Trumper Jim Jeffrey, boasted in November that he circumvented Trump’s orders to withdraw American troops from Syria by lying to the President. Jeffrey explained: “We were always playing shell games to not make clear to our leadership how many troops we had there,” and said that “the actual number of troops in northeast Syria is ‘a lot more than’ the roughly two hundred troops Trump initially agreed to leave there in 2019.” Read More

Biden moves to reengage with Palestinians after Israel focus

NETANYAHU’S PURIM WARNING TO IRAN: LIKE HAMAN, YOUR PLOT TO ANNIHILATE US WILL FAIL TOO

Israel adopts law allowing names of unvaccinated to be shared