Home PT Global Economy Oil Rallies As Russia Agrees With OPEC+ Not To Raise Output In...

Oil prices rallied on Tuesday morning, following reports that Russia—the OPEC+ producer that was insisting on a 500,000-bpd production increase in February—has agreed that there would not be another rise in the pact’s production next month.

Both benchmarks were up by more than 3 percent as of 10 a.m. ET, with WTI Crude surging above $49.50 a barrel and Brent Crude trading at $52.80 after several reports emerged that Russia had accepted a compromise not to push for another increase next month. 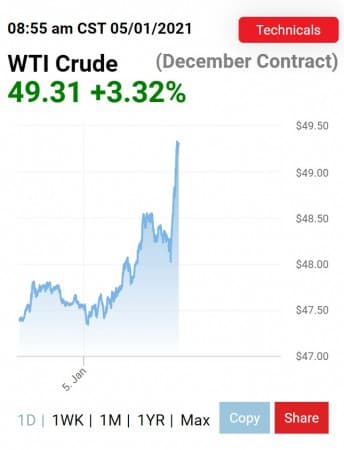 “An informed source just told me that it appears that #Russia has agreed that there won’t be any increase of 500 thousand bpd for the month of February, but, not the cessation of increase for the month of March,” oil journalist Reza Zandi tweeted early on Tuesday, ahead of the second day of the online meeting of the Joint Ministerial Monitoring Committee (JMMC). Read More