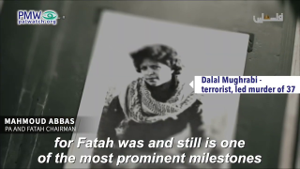 As part of the celebrations of Abbas’ Fatah Movement’s 56th anniversary, official PA TV broadcast a short video lauding and emphasizing Fatah’s terror history. While Abbas is heard speaking about Fatah’s “achievements,” the filler shows pictures of terrorists and mass murderers who participated or planned the most lethal terror attacks against Israel: Arch-terrorist Abu Jihad who planned the murder of at least 125; Dalal Mughrabi who led the murder of 37 civilians, among them 12 children; and Salah Khalaf who headed the Black September terror organization that carried out the massacre of the 11 Israeli athletes at the Munich Olympics in 1972”:

Netanyahu Preparing for Battle with Biden on Renewing Iran Deal