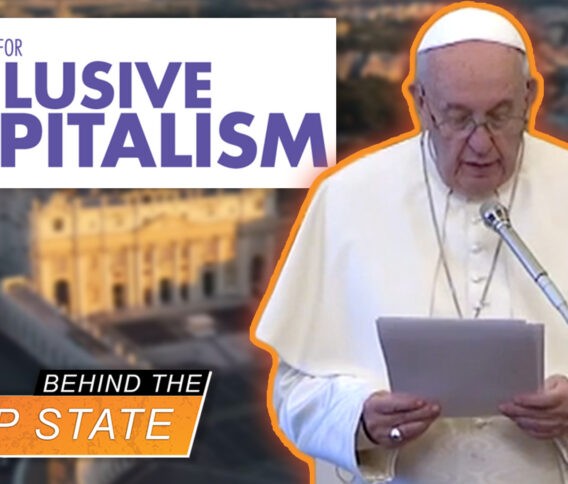 The New American: In this episode of Behind The Deep State, host Alex Newman exposes the new Coalition for Inclusive Capitalism With the Vatican bringing together Pope Francis, the Rothschild banking dynasty, government leaders, tax-exempt foundations, UN bigwigs, central bankers, and top mega businesses to replace what remains of the free market with fascist-style global technocracy.

Getting business and capital onboard with the totalitarian United Nations Agenda 2030 Sustainable Development Goals (SDGs) is a key part of the plan. Newman explains that this alliance is aimed at putting a religious and moral veneer on the globalist effort to usher in the “New World Order” that the Deep State has been pushing for generations.

Opinion: The first 3 minutes  “this new new alliance is on a religious agenda of the new world order” is right out of the playbook of the days of ancient Rome and the relationship with popes and kings:

When Constantine the Great issued the Edict of Milan of 313 AD, Christianity became legal in the Roman Empire; but pagan worship was still allowed, and Constantine and his successors continued to use the title “pontifex maximus‘ – guardian of the Roman cults.

In the Middle Ages, (800 AD), Pope Leo III crowned Charlemagne Emperor of the Romans, reviving the title in Western Europe after more than three centuries, thus creating the Carolingian Empire, whose territory came to be known as the Holy Roman Empire.

This alliance is putting a religious garb on the agenda for the new world order.

Inclusive Capitalism is direct from Adolf Hitler’s concept of National Socialism, i.e., the government controls how business will run and what products will be made.

And much like the time of Hitler, the Rothschild name was front and center supporting the tyrant, the same family name appears to be in the lineage of the author of the Holocaust.

The alliance has more than $10.5 trillion in working capital, $2 trillion in market capitalization, 200 million workers, and offices in 163 countries.

With Pope Francis aboard, Inclusive Capitalism will have all the trappings of a church-sanctioned government

Enter Lynn Forrester De Rothschild, managing director of Inclusive Capital Partners who happen to own huge shares in central banks around the world and who created George Soros.

All roads lead to prophecy, as the stage is being set for Antichrist (Revelation 13:1).