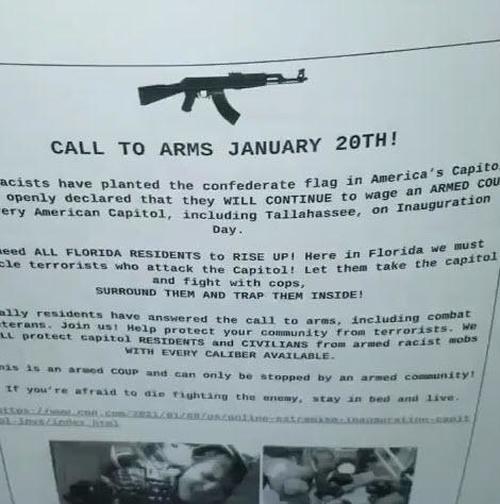 Prosecutors said they “averted a crisis” at the Capitol by arresting 33-year-old Daniel Baker, taking him into custody on a charge involving making a threat to kidnap or injure, the U.S. Attorney’s Office for the Northern District of Florida announced in a news release.

“Baker issued a call to arms for like-minded individuals to violently confront protestors gathered at the Florida Capitol this Sunday,” prosecutors said. “He specifically called for others to join him in encircling any protestors and confining them at the Capitol complex using firearms.”

Protests and rallies are expected at state Capitols across the country ahead of and on inauguration day in opposition to the election results.

“This is an armed COUP and can only be stopped by an armed community!” Baker wrote in a flyer titled “Call to Arms January 20th” posted online, a criminal complaint against him alleges (pdf).

Opinion: As the United States gets ready to return to Obama-style world order it is important for us to finally, once and for all, get a clear understanding as to the differences between liberals and leftists.

This understanding will be key as we the people prepare to be governed by Joe Biden and Kamala Harris.