While there is broad consensus that today’s payrolls report will be ugly, with economists expecting a sharp slowdown in December job growth in the U.S. due to the second wave of covid lockdowns and a quarter of those surveyed (including Goldman) predicting a negative print when the data is published at 8:30 a.m. ET, that did not dent the euphoric sentiment unleashed with the Democrats’ blue wave victory in Georgia, and as traders walked into their basement offices on Friday the Emini was trading up 13 pts ot 0.3%, to 3,808 having hit a record high of 3,817.75 earlier. The dollar erased gains and 10-year Treasury yields were flat. 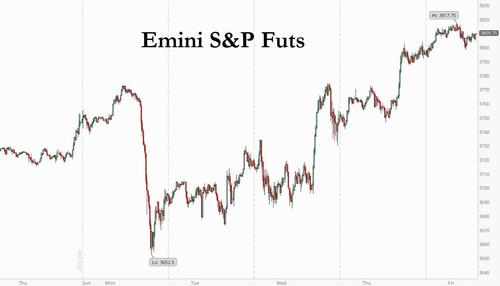 Among individual stocks, hedge fund hotel Sarepta sank 46% in premarket trading after a trial for its gene therapy missed investor expectations.  Micron Technology Inc rose 4.5% after the chipmaker forecast second-quarter revenue above estimates as a global shift to remote work and a recent uptick in 5G smartphone adoption drove demand for its chips. U.S.-listed shares of Baidu Inc jumped 5.2% on plans to form a company to make smart electric vehicles, according to two sources familiar with the matter.

Late on Thursday, President Trump finally conceded and pledged to pursue a smooth transition of power and condemned the earlier unrest at the Capitol. Trump is under siege from some Republicans as well as Democrats and from inside his own administration as top officials announce resignations. Read More