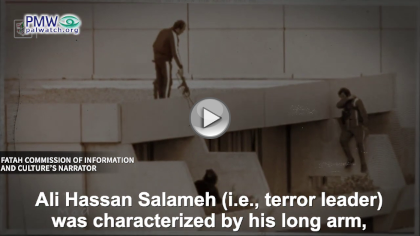 Fatah about terror commander: “A beacon guiding… the path to ‎liberation”‎

Eight Palestinian terrorists from the terror organization Black September, a secret ‎branch of Fatah, broke into the athletes’ village at the Munich Olympics on Sept. 5, ‎‎1972. The terrorists took Israeli athletes and coaches hostage in their rooms, ‎murdering two right away, ultimately murdering 11 when the German police tried but ‎failed to rescue the hostages and subdue the terrorists at an airport near Munich.‎ 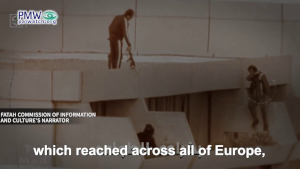 Still today, Abbas’ Fatah views these murders as an achievement and “a quality ‎operation” as expressed in this video posted by Fatah on the anniversary of the ‎death of the Black September commander Ali Hassan Salameh who was one of ‎the planners of the Munich massacre as well as many other attacks: ‎

The stills at the beginning of the video show German police disguised in sports ‎clothes climbing the roof of the building where the Palestinian terrorists held the ‎Israeli athletes hostage.‎ Read More

Opinion: One of Black September’s founders, Yasser Arafat, was also one of the 20th century’s most bloodthirsty anti-Semites. Considering that Joe Stalin, Adolf Hitler and Pol Pot lived in that century, that speaks volumes.

On November 11, 2004, Yasser Arafat died and the baton was passed to Mahmoud Abbas the current terrorist leader of the Palestinian Authority, keeping the blood feud in a line of Edom’s descendants.

Not coincidentally, Arafat’s headquarters are in Judea (West Bank), the same area that the Greeks and Romans called Idumea because of the preponderance of Edomites living there at the time of Jesus.

Malachi 1:4 calls it the ‘territory of wickedness’.

Even though Edom has said,

“We have been impoverished,
But we will return and build the desolate places,”

“They may build, but I will throw down;
They shall be called the Territory of Wickedness,
And the people against whom the Lord will have indignation forever.
5 Your eyes shall see,
And you shall say,
‘The Lord is magnified beyond the border of Israel.’

The secular left is willfully Biblically blind, and has no idea with Whom they are dealing.