Oil Price: Just days after one of our favorite macro strategists, Dylan Grice, predicted that the stage is set for “a bull market in oil“, and JPM quant Marko Kolanovic said a new oil and commodity supercycle has begun, oil is starting to get the message, and has jumped more than 2% on Friday… 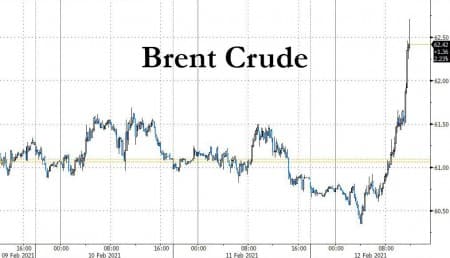 … rising to the highest intraday level in more than a year as output curbs from top producers whittle down global inventories, while JPM predicts that an epic systematic short squeeze is about to be unleashed next month in oil (we discussed this earlier this week, and will touch on this shortly again).

Oil was set for a second straight weekly gain, as OPEC+ continued to slash output and the group expects a stronger second half of the year, which to Bloomberg indicates “that global inventories will face sharp declines unless the cartel boosts supply.” Indeed, Iraq said OPEC+ is unlikely to change its output policy at a March meeting.

Meanwhile, in the U.S., crude stockpiles are at the lowest in nearly a year. Read More