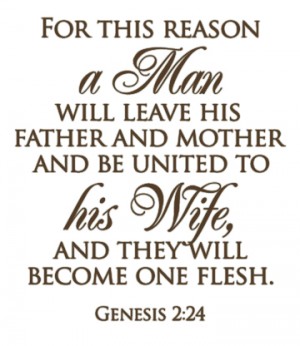 An excellent wife, who can find?
For her worth is far above jewels. —Proverbs 31:10

Today’s Study is from the heart of a woman who shares from God’s word what a wife should represent to her husband. Husbands, there is no doubt that you’re also to be loved and respected, but today we look at the woman’s special role.

In Genesis 2:7, 20 God had compassion on the man and his solitude, there was no one of the same nature as Adam. He that made him knew what was good for him, man needed a helpmate similar to himself. So at that moment, God created the second human being, a woman, named Eve. Genesis 2:22-24

God creates a new thing to be a help-meet for man—not so much the woman as the seed of the woman. For the increase, continuance of his kind, to love and be loved, God saw fit to make that number by a succession of generations, which, as God had formed man, must be from two, and those male and female. Adam was first formed, then Eve (1 Tim. 2:13 ), and she was made of the man, and for the man. This puts an honor upon that sex, as the glory of the man, 1 Co. 11:7.

If man is the head, she is the crown, a crown to her husband, the crown of the visible creation. The man was dust refined, but the woman was dust double-refined [from his rib], once removed further from the earth.

That the woman was made of a rib out of the side of Adam; not made out of his head to rule over him, nor out of his feet to be trampled upon by him, but out of his side to be equal with him, under his arm to be protected, and near his heart to be loved.

Let us acknowledge God’s right to rule us, and our own obligations to be ruled by Him; and never allow any will of our own in contradiction to, or competition with, the holy will of God. – Matthew Henry