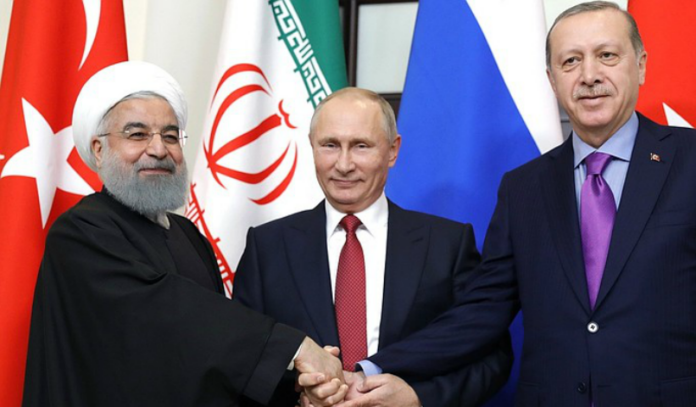 Jerusalem Post: Iran’s Foreign Minister Javad Zarif was very content during a trip to Turkey on Friday. He said it was productive and smiled alongside his Turkish counterpart Mevlut Cavusoglu. He said it was a “wonderful” trip where he spoke with his “brother Cavusoglu.”

The trip signals the growing alliance that Turkey and Iran have in the region.

Zarif said: “As before, constructive engagement on bilateral and regional issues. Ultimate aim: Apply Iran and Turkey’s experience of 400 years of peace to our region. Together, anything is possible.”
Meanwhile Turkish President Recep Tayyip Erdogan took Russia’s side in a growing spat with the US, slamming President Joe Biden who is widely hated by Turkey’s ruling party.

He claimed that Biden’s recent comments about Russian President Vladimir Putin were unacceptable and “not fitting of a president.” Read More …

Opinion: A Biblical world view of the headline could read:

“The Gog Magog Alliance of Nations Come Into View”

Ezekiel 38:4 “I will turn you around, put hooks into your jaws, and lead you out, with all your army, horses, and horsemen, all splendidly clothed, a great company with bucklers and shields, all of them handling swords.”

The only nations not mentioned in the headline are Cush and Put.

Both Russia and Turkey sell arms to North Africa …

The Unexpected Alliance Between Turkey and Libya: ‘Gas Wars’ In The Mediterranean

Along with natural resources, arms exports are a key component of Russia’s economy. In the last two decades, Moscow has managed to deepen its connection with Africa and became the biggest arms supplier on the continent.  read more

“The U.S. has accused Russia of upping the stakes in Libya by sending fighter jets to support Russian mercenaries fighting there” read more

All roads lead to prophecy.