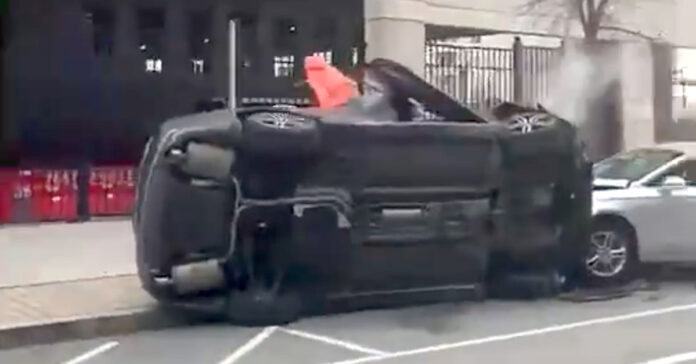 Zero Hedge: An Uber Eats driver was killed by two young teenage girls in Washington D.C. after they carjacked his vehicle last Tuesday on March 23, in one of the most shockingly horrifying videos posted on Twitter.

Woe to those who call evil good, and good evil;
Who put darkness for light, and light for darkness;
Who put bitter for sweet, and sweet for bitter! Isaiah 5:20

They murdered an Uber Eats driver in DC. pic.twitter.com/Zz7xOu0Piv

It is clear that it was no accident. The teenagers took off at high speed with the while the desperate driver was hanging onto his driver’s side door. He had been begging for them to get out. He was eventually thrust from the vehicle into a wall and the National Guard on the street attempted to clear the area. The girls lost control of the vehicle, which ended with it crashing on its side.

Passersby watched in horror and recorded the incident, saying they were calling the police before the vehicle burst off at high speed.

“A man died and two girls, ages 13 and 15, face felony murder charges after police say the girls carjacked the man near Nationals Park on Tuesday, used a stun gun against him and caused the car to flip,” NBC reported.