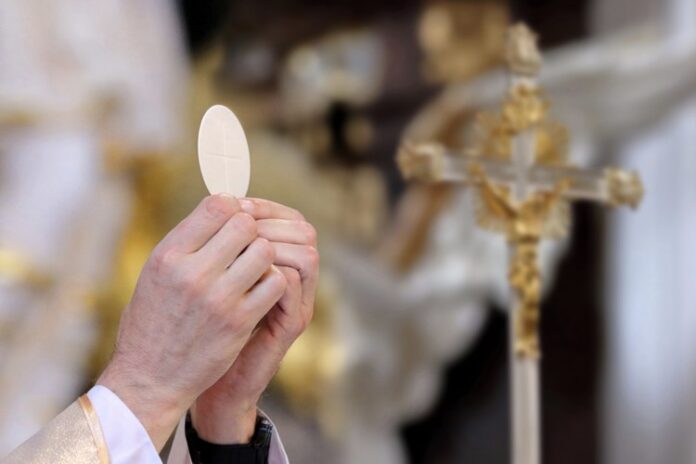 The New American: The U.S. Conference of Catholic Bishops ignored the Vatican and a gaggle of USSCB’s members to overwhelmingly approve drafting a formal statement on what the sacrament of the Eucharist — or Holy Communion — means to the Catholic Church.

“that if you confess with your mouth the Lord Jesus and believe in your heart that God has raised Him from the dead, you will be saved.” Romans 10:9

On Friday, the bishops voted 168-55, with six abstentions, to move ahead. They were forced to act because President Biden, the most prominent Catholic in the country, is pro-abortion. That means he should not present himself for Communion at Mass.

Catholics have been pushing Catholic prelates to deny the sacrament, as Church law requires, to pro-abortion Catholic politicians such as Biden, House Speaker Nancy Pelosi, and others.

The bishops have refused to do so because they don’t want to “politicize” or “weaponize” the Eucharist, some claim. Catholics believe the Eucharist is the literal body and blood of Jesus Christ.

Weeks ago, 67 bishops wrote to USCCB chieftain Los Angeles Archbishop José Gomez and told him to stop the vote. That bunch acted after a note from the Vatican said such a vote might cause “discord” in the Church. Read More