Canada’s largest banks are all offline. Royal Bank, BMO Bank of Montreal, CIBC Bank. Did Trudeau try to hack into their databases? Did the U.S. hack them first, to stop it? What could cause all three to crash on the same day — hours after Trudeau’s expropriation order?

BANK Outages at all big 5 banks!
It’s happening.
Trudeau has crushed consumer confidence in the banks in less than 48 hours. Some ATMs are still allowing cash to be pulled out but going empty.
The bank has now locked up EVERYONES funds!

Patriots have been pulling funds and closing accounts all day to protest Trudeau. 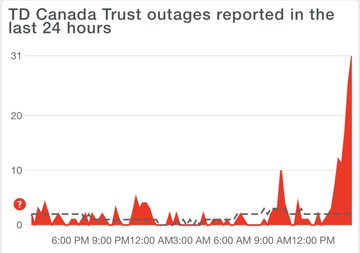 “He causes all, both small and great, both rich and poor, both free and slave, to receive a mark on their right hand or on their forehead, 17 so that no one may buy or sell, except he who has the mark or the name of the beast or the number of his name.” Rev. 13:16-17

Chrystia Freeland announces that the government of Canada gives full authorization to financial institutions "to temporarily cease providing financial services" and "review their relationships with anyone involved in the blockade."

Biden Blasted Over ‘Do It Now’ Demand On Privately Owned Gas Stations: ‘It’s YOUR Fault’