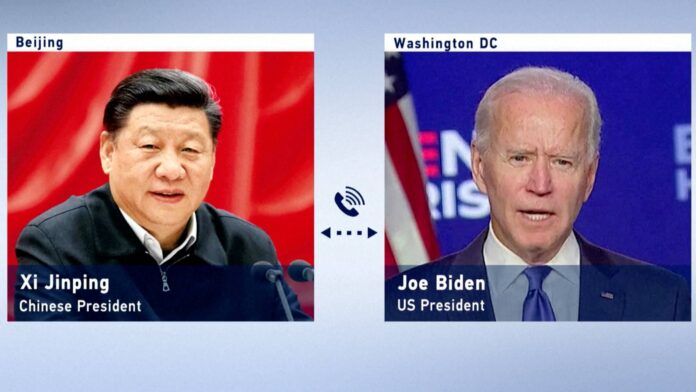 LEAD STORY President Joe Biden calls the leader of the Communist nation of Red China to receive instructions for his administration Read Jimmy’s report on today’s top story, and how this event relates to Bible prophecy.

JD: Joe Biden was able to get a hold of the Chinese Communist party leader and have a long conversation with him.

KT: Well put Jimmy and this conversation lasted two hours. President Xi Jinping had a lot of instructions to deliver to Joe Biden, a lot of demands. Look this relationship between the United States and China is absolutely central to the next decade of world politics not just to both of our countries but for the rest of the world. China is the rising power. They are set to surpass the US in terms of economic output this year. They are also the rising military power. China is flexing its muscles by influencing the United States government true Joe Biden directly.

You’ll notice that this past week the Biden Administration issued an executive order that essentially removed all of the Trump Administration restrictions on the confusions institutes operating in the United States within our education system especially colleges and universities across the country. These are Chinese government funded institutes and their goal is to promote the Chinese Communist party. That’s what I really fear is going on here is Joe Biden potentially cow tailing to Communist China, taking orders from Communist China. Removing the Trump era restrictions on US investments in Chinese military companies for example, the listing of Chinese military PLA controlled companies on the US stock exchange, the removal of restrictions on the institutes these are things the Chinese party desperately wanted from the United States. They desperately wanted Joe Biden to come in and replace Donald Trump and now they have a compliant President. This is just the beginning.

JD: Ken Timmerman with the details on the phone call between President Biden and the leader of Red China.

Ken’s report seems to be telling us that the Biden Administration is ready to give China the upper hand in US – China relations. Politics aside Bible prophecy does reveal that China will be the major nation in the world, the last half of the seven year Tribulation period, that’s Revelation 16:12. And China at that time will be in partnership with the antichrist, that’s Revelation 16:13-16. US – China relations today setting the stage for Bible prophecy to be fulfilled.