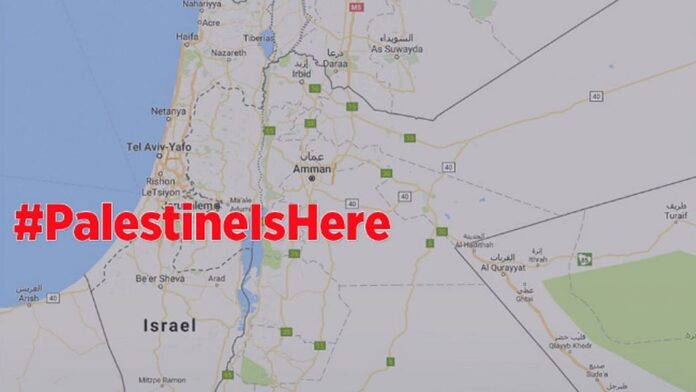 The posts were somewhat misleading, notably one which garnered over a million “likes” on Instagram, given it appears Palestine had never been labeled on the searchable maps in the first place.

Yet it still unleashed a storm of controversy, leading to Palestinian leaders calling for a boycott of Google among their population, and the Palestinian Authority (PA) declaring it would look for an “alternative”. Read More …

Opinion: Palestine is recognized as a state by the UN, 9 of 28 EU nations, and the Vatican. The so-called state is limited to Judea, Samaria and Gaza.

The term Palestinian used to refer to the coastal region associated with the Philistines (12th century BC until 604 BC), an ancient foe of the Jewish people.

Prior to the 1948 rebirth of Israel, people who used the word “Palestinian,” were referring to Jews, not Arabs. The Jews living in “Palestine,” then under the control of the British, called themselves “Palestinians.” The Jewish newspaper now called the Jerusalem Post was then called the “Palestine Post.”

Arab people living in Israel now call themselves Palestinians. The name can be credited to Yasser Arafat, one of the most bloodthirsty criminals of the 20th century. Arabs who didn’t flee the 1967 war were placed in camps by Jordan’s king, and it was in those camps that the name stuck.

There is no distinct Palestinian culture. There has never been a land known as Palestine governed by Palestinians. Therefore there are no historic Palestinians. It’s a political fantasy sold to the world by those opposed to a Jewish national homeland called Israel. (Source: WND Joseph Farah)

Apple and Google have been accused of deleting Palestine from their online maps, despite it never being labelled in the first place.