The Times of Israel: The head of the Hamas terror group was among the first foreign officials to congratulate Turkish leader Recep Tayyip Erdogan on his apparent election victory Sunday.

Haniyeh congratulated Erdogan and said he would dispatch a delegation to Turkey in the coming days, and indicated a willingness to deepen ties with Ankara, the statement said. more … 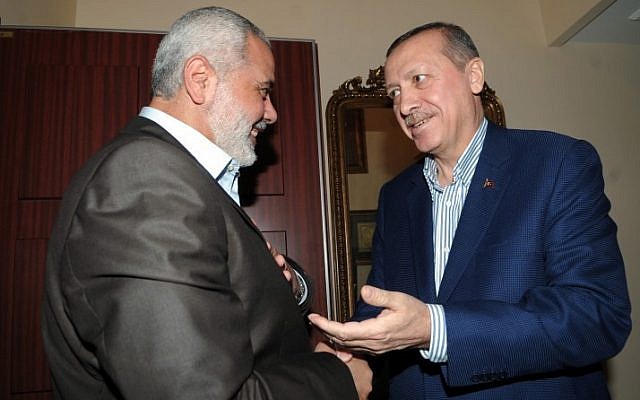 Opinion: Sunday’s vote ushers in a powerful new executive presidency long sought by Erdogan and backed by a small majority of Turks in a 2017 referendum. Critics say it will further erode democracy in the NATO member state and entrench one-man rule.

With Erdogan’s increased power, Hamas is now in position to plan for the next phase of war with Israel bringing the prophecy of Psalm 83 into view. It will be interesting to watch Hamas cozy up to Iranian puppet Hezbollah which not coincidentally was a headline post in Jerusalem online just 4 days ago:

“Hezbollah is training Hamas members in Lebanon territory, according to a new report by the Lebanese newspaper Al-Jumhuriya, citing Israeli intelligence. In addition, the Lebanese-based Hezbollah terrorist group has been working on the construction of a missile manufacturing factory in Lebanon.”

Keep in mind that while there is no love lost between Shia and Sunni, the common denominator among all Muslim nations is a hatred of Israel, and both ideologies are indicated in the Psalm 83 alliance.

The new Sultan of the Islamic caliphate will have a short reign as prophesied in Ezekiel 38:18-21.

Where did the Biblical road from Judea to Edom pass? Experts find answers