Home anti-Semitism Israel 25 Years after the Oslo Accords: Why Israelis Shy from Victory

Instead of ending the Palestinian-Israeli conflict, the “Oslo peace process” between Israel and the Palestine Liberation Organization (PLO) created an ineradicable terror entity on Israel’s doorstep that has murdered some 1,600 Israelis, rained thousands of rockets and missiles on the country’s population centers, and toiled tirelessly to delegitimize the right of the Jewish state to exist. more … 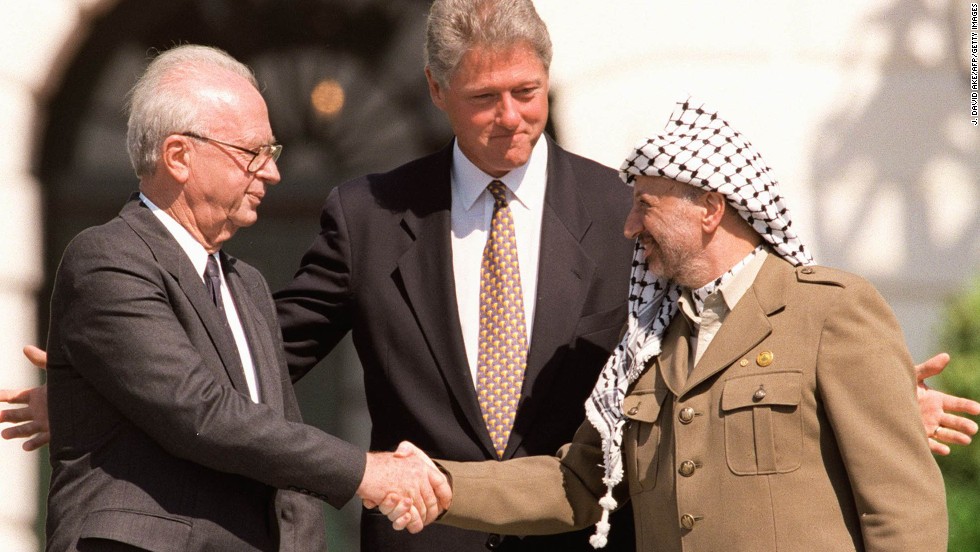 Oslo was a 7 year land for peace plan that grew out of the Madrid Conference of 1991. Once again, God’s covenant to Abraham (Genesis 12:3) regarding the land was completely ignored, and foolish leaders shook hands.

On December 13, 1993, President Bill Clinton was faced with allegations that state troopers had arranged sexual relations for him while he was governor. On November 4, 1995, Yitzhak Rabin was assassinated.

The Oslo II Agreement, also known as the Taba Agreement, called for Israeli withdrawals from various Palestinian areas and expanded Palestinian self-rule. It divided the West Bank and Gaza into three areas controlled by: Israel, the Palestinians, or Palestinian
civil authority with Israeli military control.

Oslo II also allowed a Palestinian election, which took place in 1996. Among other provisions, the agreement also provided “safe passage” to Palestinians traveling between Gaza and the West Bank, although Israel was also allowed to legally close crossing points into Israel if deemed necessary.

“Then he [antichrist] shall confirm a covenant with many for one week; but in the middle of the week he shall bring an end to sacrifice and offering.”

The clue here is the word confirm. You cannot confirm something that does not already exist. Antichrist doesn’t create a treaty, but enforces one already in existence.

Daniel says that the treaty will be with “many” (Israel and neighbors), and “one week” in Hebrew (shabua) means 7 years, making a modified Oslo III, an interesting fit for the future world leader (Revelation 6:1-2, 13:1-2).