(Russian banks at risk of collapse)

Assessment: “If Russian banks cannot recover their claims or pay their liabilities to the rest of the world the global financial system may experience shockwaves of liquidity events …

The dramatic moves to isolate Russia from the global financial system have effectively frozen securities worth more than $500 billion.

At the end of last year, foreign investors held $62 billion in sovereign debt, two thirds of which was denominated in rubles, according to Central Bank of Russia data. The nominal foreign debt of Russian banks and corporations totaled $381 billion, the central bank data show. 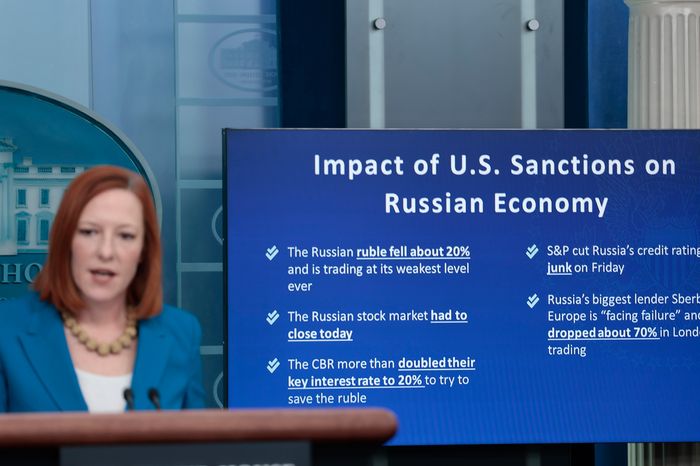 The U.S. and its western allies have cut some Russian banks from the SWIFT messaging system, as the U.S. barred any transactions with Russia’s central bank. On Tuesday, the U.K. said it’s adding Sberbank to its list of sanctioned entities.

The clearing houses Euroclear and Clearstream are moving to stop clearing ruble-denominated securities, and MSCI said it may reclassify Russia as a “standalone” market, from its current emerging-market status. JPMorgan froze two funds that invest in Russia, The Wall Street Journal reported.

The moves aren’t just one way — Russia is blocking payments to institutions outside the country.

OPEC Ministers Warn No Increase In Supply Is Coming Online