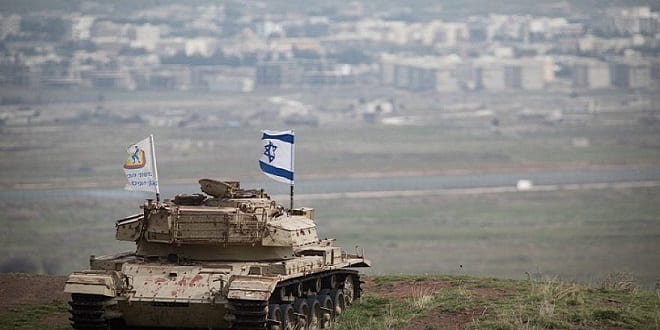 BIN: Sources in Syria reported that anti-regime forces fired surface-to-air missiles at Syrian aircraft in southern Syria, after the aircraft responded to a “hostile target” which tried to enter Syrian airspace.

The incident takes place while Russia has been stepping up its efforts to control sections of the Syrian Golan in recent weeks which include establishing a local militia, a development the Israeli government perceives as positive for the region.

According to the report, Russia hopes that its presence in the Syrian Golan will lower the tensions between Israel and Iran/Hezbollah.  Al-Huran troops are reported to be taking down checkpoints established by the Syrian regime army and opposing any influence of Hezbollah in those areas of southern Syria. They are also setting up a civilian authority independent of the Syrian government. Read More …

Opinion: Russia’s presence in the Syrian Golan is a page from Bible prophecy according to Ezekiel 39:1-4:

“Son of man, prophesy against Gog and say: ‘This is what the Sovereign Lord says: I am against you, Gog, chief prince of Meshek and Tubal. 2 I will turn you around and drag you along. I will bring you from the far north and send you against the mountains of Israel.“

The far north on a flattened map points to Russia. The strategic mountains of the Golan are vital to Israel’s security and an ideal place for Gog (prince of Russia) to launch an attack.

“Then I will strike your bow from your left hand and make your arrows drop from your right hand. 4 On the mountains of Israel you will fall, you and all your troops and the nations with you. I will give you as food to all kinds of carrion birds and to the wild animals.”

The sworn enemies of Iran and its proxy, Hezbollah, appear locked and loaded for conflict.