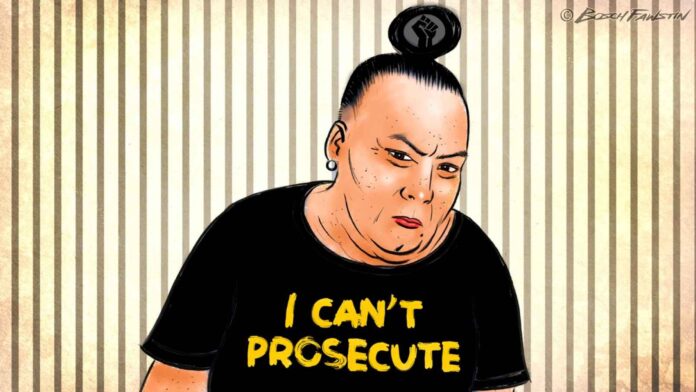 Front Page Mag: Murders are up 54% in Boston, fatal shootings shot up 60%, and commercial burglaries rose 62%. Now Biden wants to make the Soros DA responsible for this mess a U.S. Attorney.

On her website, Suffolk County DA Rachael Rollins has a list of crimes that she will not prosecute, ranging from shoplifting, to stealing anything under $250, breaking and entering a vacant property, driving with a revoked license, malicious destruction of property, threats, and drug possession with intent to dist ribute. Effectively these crimes have been legalized.

For the mystery of lawlessness is already at work; only He who now restrains will do so until He is taken out of the way. 2 Thess. 2:9

Biden claims that Democrats oppose police defunding and the pro-crime policies that have plunged the nation’s major cities into a vortex of violence. Choosing Rollins shows that’s a lie.

Rollins, like other DAs backed by radical mega-donor George Soros, has worked to dismantle the criminal justice system leaving people to be terrorized by a crime wave unleashed by BLM.

But no Soros DA was as vehemently and openly racist as Biden’s new nominee. Read More