Leviticus 23:34-43 “Speak to the children of Israel, saying, the fifteenth day of this seventh month shall be the Feast of Tabernacles for seven days to the LORD ….”

Sukkot is a seven-day holiday that arrives during the Hebrew month of Tishrei (Sept/Oct). The holiday takes place 15 days after Rosh Hashanah, and five days after Yom Kippur. It is a drastic transition from one of the most solemn holidays in the Jewish calendar to one of the most joyous. The seventh day of Sukkot is called Hoshanah Rabbah (“Great Salvation”) and closes the period of Divine judgment begun on Rosh Hashanah.

Sukkot is also known as the Festival of Booths, the Feast of Tabernacles, and Feast of Ingathering. It is a historical and an agricultural festival. It was to be an annual reminder of God’s provision during the 40 year period of the Israelites’ wandering in the wilderness living in temporary shelters and also of the final harvest of the year.

This is a time when the pilgrims of Israel must return to Israel for the last of three pilgrimage feasts (Passover, Shavuot, Sukkot). The tithes of the land were brought in and the males presented themselves before the Lord in Jerusalem, Exodus 23:16-17.

In Leviticus, God told Moses to command the people:

In celebration of the bounty of the Holy Land, on each day of the holiday it is mandatory to perform a waving ceremony with the ‘Four Species’: palm, myrtle, willow, and citron.

There is a great tradition that originates from the gathering of specific species of trees and fruits that teach us about the nations in this Feast of Ingathering. These are the breakdown of those four specific species (or kinds):

Today, in observant Jewish homes at the completion of Yom Kippur, temporary ‘booths’ are constructed in yards and on patios. The booths are made with no fewer than three walls and intertwined with branches. The booths are decorated with colorful fruits and branches. Some Jewish families eat their meals in them and the most observant sleep in them. 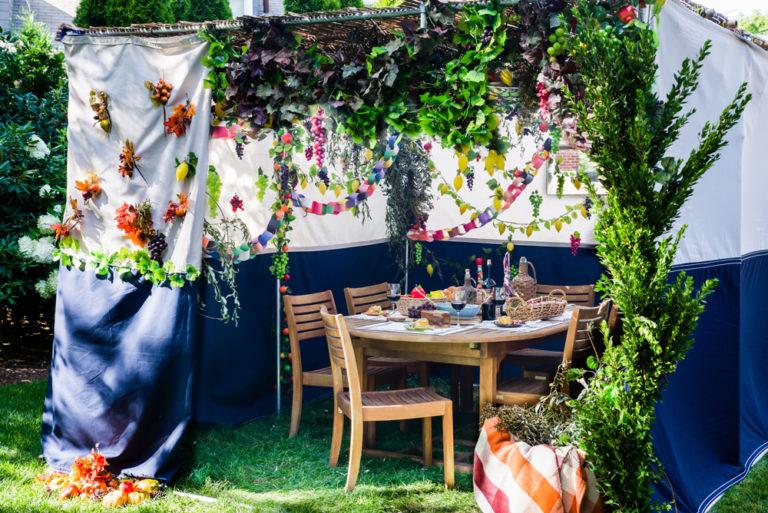 Sukkot is also called the Sabbath of the Feasts. This is because Sukkot is the 7th feast that occurs in the 7th month and it lasts 7 days. The eighth day is not technically Sukkot but a separate holiday known as Shemini Etzeret (the Eighth Day).

The first two days of Sukkot (from sundown of the first date listed, until nightfall two days later) are full-fledged, no-work-allowed holiday days. The subsequent days are Chol Hamoed, when work is allowed, albeit with restrictions. The seventh and final day of Sukkot is known as Hoshanah Rabbah (“Great Salvation”). According to tradition, the verdict on each individual for the new year – which is written on Rosh Hashanah and sealed on Yom Kippur – is not handed down by the Heavenly Court until Hoshanah Rabbah.

Coming as it did at the completion of the harvest, the agricultural origin of Sukkot was a general thanksgiving to the LORD for the bounty of nature in the year that had passed.

Our American pilgrims, who originated the Thanksgiving holiday, were deeply religious people. When they were trying to find a way to express their thanks for their survival and for the harvest, they looked to the Bible for an appropriate way of celebrating and based their holiday in part on Sukkot.

The Feast of Tabernacles points to the Lord’s promise that He will once again “tabernacle” with His people when He returns to reign over the entire world.

The Bible speaks of the final judgment as a harvest. When Messiah sets up His Millennial (1000 year) reign to fulfill the Davidic Covenant, He will gather the remnant of Israel back to her land. Isaiah 27:12-13 describes this event as the harvesting of the Jewish people one by one.

“And it shall come to pass in that day That the Lord will thresh, From the channel of the River to the Brook of Egypt; And you will be gathered one by one, O you children of Israel.

So it shall be in that day: The great trumpet will be blown; They will come, who are about to perish in the land of Assyria, And they who are outcasts in the land of Egypt, And shall worship the Lord in the holy mount at Jerusalem.”