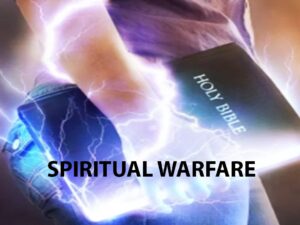 “There are two equal and opposite errors into which our [human] race can fall about the devils. One is to disbelieve in their existence. The other is to believe, and to feel an excessive and unhealthy interest in them. They themselves are equally pleased by both errors, and hail a materialist or magician with the same delight” (Lewis, C.S. The Screwtape Letters. San Francisco: Harper Collins, 1941, p.3).

When it comes to the question of the existence of the devil and his demons, people frequently have one of two reactions:

Lucifer was not satisfied with worshiping God; instead, he wanted to be worshiped. Once a beautiful, powerful angel of God, he lost his former, exalted position in Heaven.

“How you are fallen from Heaven, O Lucifer, son of the morning! How you are cut down to the ground, you who weakened the nations! For you have said in your heart: ‘I will ascend into Heaven, I will exalt my throne above the stars of God; I will also sit on the mount of the congregation on the farthest sides of the north; I will ascend above the heights of the clouds, I will be like the Most High.’ Yet you shall be brought down to Sheol, to the lowest depths of the Pit” (Isaiah 14:12–15).

Lucifer (“star of the morning”) became Satan (“accuser”) when he fell to the earth. Jesus, speaking of this event, said, “I saw Satan fall like lightning from Heaven” (Luke 10:18). Scripture tells us that he took one-third of the angels (see Revelation 12:4).

Satan is God’s enemy and the enemy of His people. He is doing whatever he can to hinder God’s work in your life. He knows he cannot harm the soul that abides in Christ, so he will endeavor to weaken your devotion to God. He is a fallen, but powerful, spirit-being with a well-organized network of demon powers to help him accomplish his purposes. “Be sober, be vigilant; because your adversary the devil walks about like a roaring lion, seeking whom he may devour.” 1 Peter 5:8

The Strategy of the Devil Satan starts with the mind

When Satan wanted to lead the first man and woman into sin, he started by attacking the mind.

Scripture says, “I am afraid, lest as the serpent deceived Eve by his craftiness, your minds should be led astray from the simplicity and purity of devotion to Christ” (2 Corinthians 11:3 NIV).

Satan hits here first because he knows that the mind is the place where we reason, contemplate, and fantasize. That is why the Bible urges us to bring “every thought into captivity to the obedience of Christ” (2 Corinthians 10:5). If the devil can just get us to think about carrying out a particular sin, that will help him to accomplish his purposes. You can never truly say, “The devil made me do it.” The tempter needs cooperation from the tempted.

Satan’s allies Satan works with two close allies: the world and the flesh

The term the world refers to the way the world operates now, which is hostile to God. The world system encourages living for personal gratification and putting our own will above all else. “We know that we are of God, and the whole world lies under the sway of the wicked one” (1 John 5:19).

The term the flesh refers to the sinful nature that lives to be gratified; unrestrained sensual appetites. “For all that is in the world—the lust of the flesh, the lust of the eyes, and the pride of life—is not of the Father, but is of the world” (1 John 2:16).

When the devil tempted Eve in the Garden of Eden (Genesis 3:1–7), he stirred up the sinful nature in her. He did this through a clever line of reasoning.

He questioned God’s Word (Gen. 3:1). He did not deny that God had spoken. He simply questioned whether God had really said what Eve thought He had said.

He questioned God’s love for Eve (Gen. 3:1). The way Satan asked this question implies that he was questioning God’s love. “If God really loved you, He wouldn’t keep something from you, would He?” Satan used this same tactic on Jesus in the wilderness: “If you are the Son of God, command this stone to become bread” (Luke 4:3). In other words, “Why are you hungry if you are God’s Son?” As the author Tennyson once said, “A lie that is all of a lie can be met with and fought outright. But a lie that is partly the truth is a harder matter to fight.”

He substituted his own lie (Gen. 3:5). Satan told Eve that if she eats from the tree, she “will be like God, knowing good and evil.” Interestingly, this was Satan’s own sin, for he had attempted to take God’s place.

Eve saw that the tree “was good for food” (Gen. 3:6). Having seen it, she tasted it. This is the lust of the flesh. Likewise, Satan wants us to gratify our desires immediately, whatever they might be—food, sleep, sex, pleasure, possessions, etc.

Eve saw that the tree “was pleasant to the eyes” (Gen. 3:6). This is the lust of the eyes. Satan uses this trap to try to get people to entertain fantasies in their thought life. Unfortunately, those fantasies often turn into reality.

Eve saw that the tree was “desirable to make one wise” (Gen. 3:6). This is the pride of life. Satan wants us to desire to be exalted, to develop an attitude of arrogance.

Eve had a choice to make—she could believe God’s word or Satan’s word. Tragically, she chose to believe Satan, the father of Lies, rather than the One who is Truth.

How to Sabotage the Devil’s Strategy

Just as surely as there is a God who loves you and has a plan for your life, there is a devil who hates you and wants to destroy your life.

Adam and Eve failed to use the weapon God has given us during times of temptation: the Word of God (also called “the sword of the Spirit”). Jesus, during His time of temptation in the wilderness, chose to use this weapon to show us its power. While He could have used His divine authority and power to ward off His enemy, He responded to Satan’s distortions of Scripture with accurate recitations of God’s Word.

Like Jesus, we need to “rightly divide the word of truth” when Satan comes to us with his lies and accusations (2 Timothy 2:15).

How can you avoid his traps and temptations? 2 Timothy 2:22 gives us the key: “Flee also youthful lusts; but pursue righteousness, faith, love, peace with those who call on the Lord out of a pure heart.”

We should keep as much distance between us and the devil as possible. “Resist the devil and he will flee from you” (James 4:7). We do this by avoiding things that will drag us down spiritually. Disobedience and persistent waywardness provide the enemy grounds from which he can attack and influence the Christian. This is why Scripture reminds us to not give the devil a foothold (Ephesians 4:27).

Ephesians 6:11–17 details each piece of the armor of God. The sword of the Spirit is the Word of God. During His temptation in the wilderness, Jesus modeled exactly how we are to use this weapon. Every time Satan tempted Him, Jesus came back with a scripture to counter Satan’s enticements.

You will never win this spiritual battle in your own strength. You will only be successful when you draw your strength from the power base, God Himself. There you will find the strength and stamina to “stand against the wiles of the devil” (Ephesians 6:11).

When the Spirit of God convicts you:

He uses the word of God in love.
He seeks to bring you back into fellowship with your heavenly Father.
He draws you to the cross of Christ.
He gets you to focus upon God and His forgiveness.
He leads you to repentance.
He moves you closer to the Lord.

When Satan accuses you:

He uses your own sins in a hateful way.
He seeks to make you feel helpless and hopeless.
He gets you to focus your attention upon yourself and your sins.
He drives you away from the cross of Christ.
He wants you to experience regret and remorse, but not repentance.
He moves you farther and farther away from the Lord.

True conviction from the Spirit will move you closer to the Lord.

Unsheathe your sword, Christian, and stop being beaten down. The Lord seems to say, “which will you have—My strength, or your weakness?”

The next time the devil reminds you of your past, you remind him of his future.