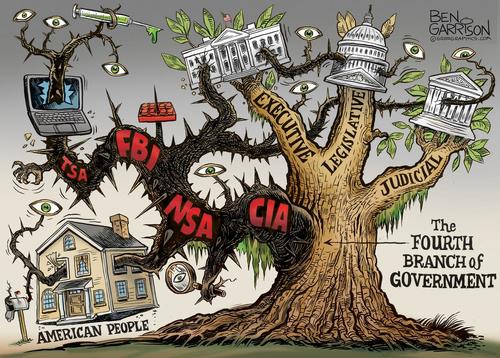 Zero Hedge: It’s bad enough that none of the alphabet ‘security’ agencies were written into our Constitution. Now they have become politicized. They no longer adhere to any rule of law. They ARE the law and can do what they want. They certainly aren’t answerable to the American people.

We saw former NSA Director James Clapper lie to Congress about collecting data from hundreds of millions of Americans and about leaking the Steele Dossier information. We saw ex-CIA director and former communist John Brennan lie about spying on Congress.

Nothing happened to them. They are above the law.

The CIA now allows and approves torture. They call it ‘enhanced interrogation.’ Yep, we a rogue agency engaged in torture.

“And in the latter time of their kingdom, when the transgressors are come to the full, a king of fierce countenance, and understanding dark sentences, shall stand up.” Daniel 8:23

We saw the FBI push through illegal FISA warrants in order to take down President Trump during the bogus Russia collusion malarky. We saw how Mueller used over a dozen heavily FBI men to surround a peaceful, non-resisting Roger Stone on trumped up charges. The CIA-influenced CNN was, of coursed, tipped off to the early morning raid.

We saw the FBI help encourage Trump supporters to protest at the Capitol while refusing to release video tapes that will prove their operatives were there. The FBI even seized a lego-made capitol building from one of the so-called ‘insurrectionists.’

We saw the FBI sit on Hunter Biden’s laptop. They did nothing. They certainly did not investigate the obvious corruption on display by the Bidens. They also knew all about Epstein’s child abuse for years. They did nothing. Read More …