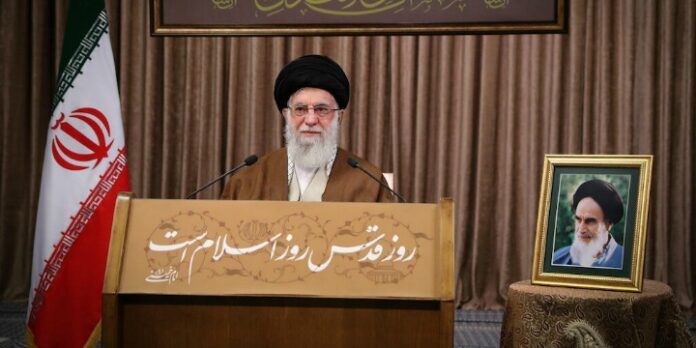 Algemeiner: Iran’s supreme leader on Friday denounced Israel as a “tumor” to be eliminated and hailed Tehran’s supply of arms to Palestinians, drawing swift condemnation from the United States and European Union.

Opposition to Israel is a core belief for Shi’ite-led Iran, which backs Palestinian and Lebanese Islamic terrorist groups opposed to peace with the Jewish state, which Tehran refuses to recognize.

“The Zionist regime (Israel) is a deadly, cancerous tumor in the region. It will undoubtedly be uprooted and destroyed,” Iran’s top authority, Ayatollah Ali Khamenei, said in an online speech. Read More …

Opinion: It would so easy to write this off as just another Edomite making all too common idle threats… Blah blah blah.

But Bible prophecy shows us that one day, possibly very soon, Iran will try to make good on the threats. The first attempt will involve Iranian proxies Hezbollah/Lebanon, and Hamas/Gaza, in league with Palestinian Authority, Jordan, Saudi Arabia, and Egypt as foretold in Psalm 83:1-8.

One event that could trigger the attack is the global outrage over Israel’s plan to declare sovereignty over Judea and Samaria, the Jewish people’s ancient homeland.

Imagine how arrogant Iran is now with not only the EU states (minus Hungary and  Austria) threatening Israel, but joining in the condemnation is Russia, China and  the Democrat Party of the United States.

“They have said, “Come, and let us cut them off from being a nation,
That the name of Israel may be remembered no more.”

Deal with them as with Midian,
As with Sisera,
As with Jabin at the Brook Kishon,
10 Who perished at En Dor,
Who became as refuse on the earth.” Psalm 83:9-10

11 Make their nobles like Oreb and like Zeeb,
Yes, all their princes like Zebah and Zalmunna,
12 Who said, “Let us take for ourselves
The pastures of God for a possession.” Psalm 83:11-12

The last verse, “Let us take for ourselves the pastures of God for a possession” is a clear reference to Edom’s squandered birthright (Genesis 25:29-34), his return in the last days to take back the land (Malachi 1:4), and Jacob’s rightful possession (Genesis 27:28-29).

With her proxies wiped out, the next war on the Bible’s calendar, Gog Magog, will find Iranian troop on the ground in Israel along with with Russia, Turkey and four North African armies.