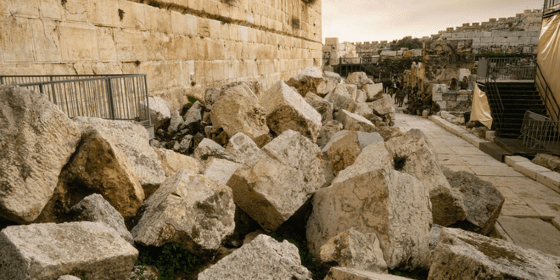 Israel 365: Until recently, the consensus of historians was that the First Jewish Temple in Jerusalem built by King Solomon in 957 BCE was looted and then destroyed in 586 BCE by the Babylonian king Nebuchadnezzar II, who then deported the Jews to Babylon.

This was explicitly described in several places in the Bible:

On the seventh day of the fifth month—that was the nineteenth year of King Nebuchadnezzar of Babylon—Nebuzaradan, the chief of the guards, an officer of the king of Babylon, came to Yerushalayim. He burned the House of Hashem, the king’s palace, and all the houses of Yerushalayim; he burned down the house of every notable person. II Kings 25:8-9

Richard Elliott Friedman, a professor of Jewish Studies at the University of Georgia, presented a new theory in a paper titled “The Destruction of the First Jerusalem Temple” published in Academia. Friedman cites four different places in the Bible in which the destruction of Jerusalem by the Babylonians is described: II Kings 25:9, II Kings 15, Jeremiah 39:8, and II Chronicles 36:19.

Friedman attributes the omission of the palace in Jeremiah to haplography, the most common scribal error in which while copying the manuscript, the scribe’s eye jumps from a word to its next occurrence in the text. Friedman suggests that the original text in Jeremiah read, “the house of Yahweh [God] and the house of the king,” with the scribal copy omitting the words “the house of God.” Read More …

Opinion: I am fascinated that a Biblical scholar would go into such incredible detail on such an ancient topic. While writing ‘Antichrist: The Search for Amalek’, following the trail of Esau to the destruction of Solomon’s Temple led me to the conclusion that it was the Babylonian army that destroyed the temple and it was the descendants of Esau (Edom) that aided and abetted.

Psalm 137:7 indicated that Edom was more of a cheerleader: “Remember, O Lord, against the sons of Edom The day of Jerusalem, Who said, “Raze it, raze it,
To its very foundation!” (Psalm 137:7).

And Obadiah 1:11-12 seemed to confirm that with God’s admonishment of Edom:

“In the day that you stood on the other side—
In the day that strangers carried captive his forces,
When foreigners entered his gates
And cast lots for Jerusalem—
Even you were as one of them.”

To me, their destruction likely means their temple. Either way, it is Edom that drew the eternal wrath of God: