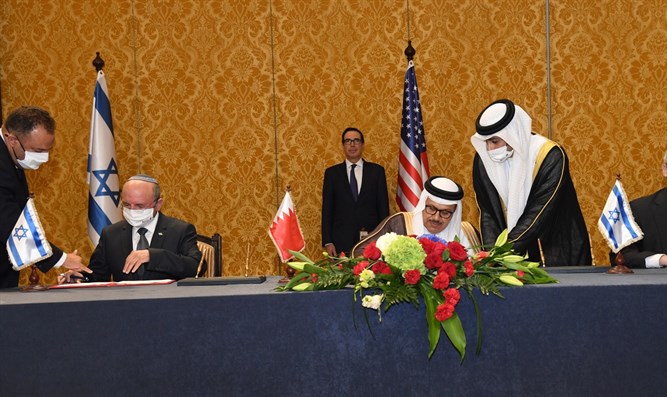 Arutz Sheva: National Security Council head Meir Ben-Shabbat, who is leading the Israeli delegation in Manama, and Bahraini Foreign Minister Dr. Abdullatif bin Rashid Al Zayani, on Sunday evening signed a joint communique on the establishment of diplomatic, peaceful and friendly relations between the Kingdom of Bahrain and the State of Israel.

“We started the day as friends and we end it as members of one family – members of the family of Abraham,” Ben-Shabbat said at the signing ceremony. “Today we took the first official step in strengthening relations between the two countries, we opened the doors for further contacts.” Read More …

Opinion: Let’s take a closer look at Abraham’s offspring to get an understanding of why all these peace relations will not work out.

Moses, (Deuteronomy 7:1-4) warned of the consequences if the Israelites married into pagan tribes:

“When the Lord your God brings you into the land which you go to possess, and has cast out many nations before you, the Hittites and the Girgashites and the Amorites and the Canaanites and the Perizzites and the Hivites and the Jebusites, seven nations greater and mightier than you, 2 and when the Lord your God delivers them over to you, you shall conquer them and utterly destroy them. You shall make no covenant with them nor show mercy to them. 3 Nor shall you make marriages with them. You shall not give your daughter to their son, nor take their daughter for your son. 4 For they will turn your sons away from following Me, to serve other gods; so the anger of the Lord will be aroused against you and destroy you suddenly.”

One thousand years later, Ezra (9:1-2) became furious when the offspring of the Israelites did exactly what Moses warned them not to do:

“When these things were done, the leaders came to me, saying, “The people of Israel and the priests and the Levites have not separated themselves from the peoples of the lands, with respect to the abominations of the Canaanites, the Hittites, the Perizzites, the Jebusites, the Ammonites, the Moabites, the Egyptians, and the Amorites. 2 For they have taken some of their daughters as wives for themselves and their sons, so that the holy seed is mixed with the peoples of those lands. Indeed, the hand of the leaders and rulers has been foremost in this trespass.”

Abraham, Isaac – son of Abraham and Sarah the son of promise – married in the family line

Abraham, Jacob – Grandson of Abraham and Sarah, Son of Isaac – married in the family line

Abraham, Midian – Son of Abraham and Keturah – enemy of the Israelite people

What Moses and Ezra knew is that the offspring of Jewish and pagan marriages would hate their Jewish blood.