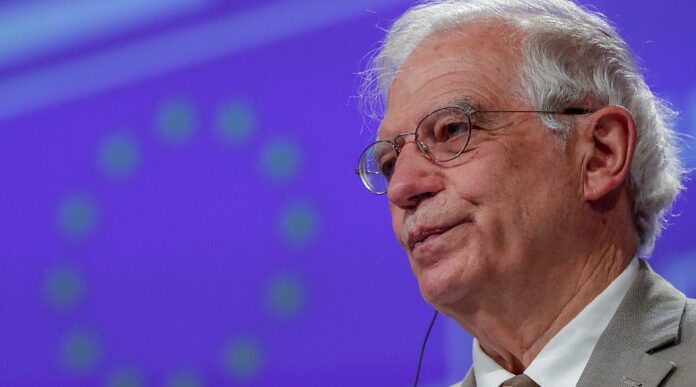 Israel Hayom: The European Union’s Foreign Affairs Commission is reportedly debating punitive measures against Israel should it push forward with its plans to annex parts of Judea and Samaria and the Jordan Valley, in accordance with the Trump administration Middle East peace plan.

Source familiar with the move told Israel Hayom that EU foreign policy chief Josep Borrell is the one pushing for sanctions.

Borrell, a Spanish diplomat, is known for his animosity toward Israel. This attitude is currently offset by the positive sentiment expressed toward Israel by Ursula Gertrud von der Leyen, a German diplomat and the sitting president of the European Commission. Read More …

“For from the top of the rocks I see him, and from the hills I behold him: lo, the people shall dwell alone, and shall not be reckoned among the nations.”

The Jewish people have two main antagonists. Denominational Christianity and Islam. Both are lethal and both have slaughtered Jews by the millions.

Surprised? Don’t be. Denominational Christians that have allegorized and spiritualized the word of God have convinced themselves that God changed His mind, and all the covenants He made with Abraham, Isaac, and Jacob have been transferred to the church.

This brand of Jew-hatred comes in two stealthy but deadly forms: Replacement Theology and Covenant Theology. The persecution of Jews by Christians is documented in secular history:

Islam was begun by Muhammad in the 6th century AD.

Excerpt, Egyptian writer Noni Darwish:  “When Mohammed embarked on his mission to spread Islam, his objective was to create a uniquely Arabian religion, one created by an Arab prophet, which reflected the Arabian values and culture.  Yet to obtain legitimacy, he had to link it to the two previous Abrahamic religions, Judaism and Christianity.  He expected the Jewish tribes who lived in Arabia to declare him their Messiah and thereby bring him more legitimacy with Arabs, especially with his own tribe in Mecca, the Quraish.  Because his own tribe had rejected and ridiculed him, Mohammed needed the approval of the Jews, whom he called the people of the book.  But the conversion of Jews to Islam was part of the scenario that Mohammed had to accomplish in order to prove to Meccans that they had made a mistake by rejecting him.

That was one of the reasons Mohammed chose to migrate to Medina, a town that had predominantly been settled by Jewish tribes and a few impoverished Arabs who lived around the Jews.  The Jews allowed Mohammed to move in.  At the beginning, the Koran of Mecca was full of appeals to the Jews, who were then described as “guidance and light” (5:44) and a “righteous” people (6:153-154), who “excelled the nations” (45:16).  But when the Jews rejected the appeasement and refused to convert to Islam, Mohammed simply and completely flipped.  The Quran changed from love to threats and then pure hatred, cursing, and commandments to kill Jews.  Rejection by the Jews became an intolerable obsession with Mohammed.

Mohammed never got over his anger, humiliation, and rejection by “the people of the book” and went to his grave tormented and obsessed that some Jews were still alive.  On his deathbed, Mohammed entrusted Muslims to kill Jews wherever they found them, which made this a “holy commandment” that no Muslim can reject. ”