130 nations, including China & India have signed the 15% global minimum tax plan sponsored by the US and OECD Except Ireland Ireland is smart to defend her advantage over China as a gateway to Europe I am shocked any African Nation and UK will agree to 15% tax on FDI 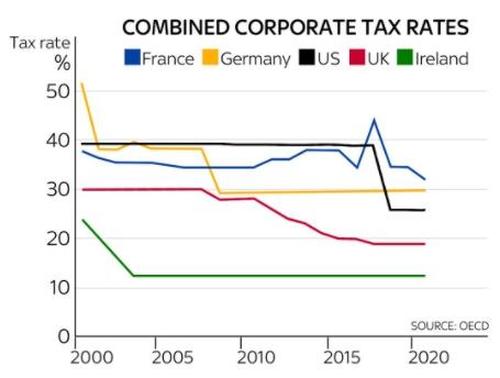 Update (1224ET): In a rare scoop, the Irish Times just reported that Ireland was one of nine countries that didn’t sign on to the global corporate tax deal that was reportedly struck Thursday afternoon in Paris following weeks of negotiations. Ultimately, 130 countries signed on, while the remaining nine countries – including Ireland – refused (the OECD has 139 members in total).

As we have reported, the Irish government has long been wary of the new framework. The Irish Department of Finance even calculated that agreeing to it would cost the country some  €2 billion in annual tax revenue as it would lose its advantageous 12.5% minimum corporate rate.

With the lowest corporate tax rate in Western Europe, Ireland’s participation in the deal is critical. If Dublin refuses to lower its corporate rate, it could create serious problems for the countries that agree to its terms, since Ireland won’t be bound by the 15% minimum rate that’s reportedly part of the deal. Read More

US Coal Prices Soar Above $200 Amid Energy Crunch