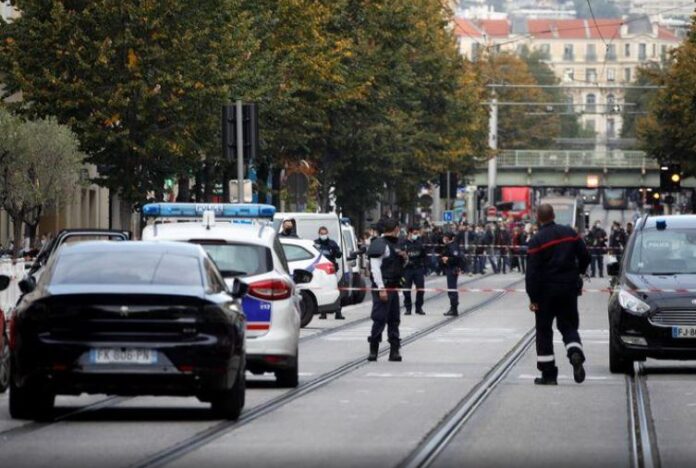 Israel Hayom: An attacker armed with a knife killed three people at a church Thursday in the French city of Nice, authorities said, and hours later police in the southern city of Avignon shot dead another man for threatening passersby with a knife.

The assailant in Nice was wounded by police and hospitalized after the murders at the Notre Dame Church, less than a kilometer (half-mile) from the site in 2016 where another attacker plowed a truck into a Bastille Day crowd, killing dozens.

Thursday’s attacker was believed to be acting alone and police are not searching for other assailants, said two police officials, who were not authorized to be publicly named. Read More …

Opinion: Ah yes, a lone wolf, nothing to see, move along.

Esau’s illegitimate grandson, born to Eliphaz and a concubine named Timna, is able to wreak havoc on a secular progressive European Union because a Biblically illiterate world refuses to connect the dots.

If/when the secular progressives take over in the US, and the White House is once again pandering to The Council on American–Islamic Relations (CAIR), the descendants of Esau/Amalek will be back bigger and badder than before.

How do I know?

Because it is Edom’s descendants who are prophesied to return in the last days to try the take back the land squandered over a bowl of red lentil soup, Genesis 25:29-34.

Even though Edom has said,
“We have been impoverished,
But we will return and build the desolate places …” Malachi 1:4

And because Obadiah 1:18 prophesied Edom’s fate

And because Isaiah prophesied that Edom’s final destruction would take place at the second coming of Messiah Jesus:

You see, Esau’s descendants cannot go into the Millennial Reign of Jesus Christ (Revelation 20:1-2) when the promise of Jacob (Genesis 25:26-27) is fulfilled.