It is also clear that Dr. Fauci and a number of other prominent American scientists had extensive contact with the Wuhan lab and Chinese scientists working there. There has been no wall between the United States and China when it comes to potentially deadly “gain of function” research on coronaviruses. Fauci in particular knew about and funded work at Wuhan that was specifically designed to make naturally occurring viruses more deadly to humans.

The central premise of the book, which has largely guided Chinese defense thought since. Read More

Opinion:  Take a moment and read that last part under “Let’s talk” again. Then put on a Scriptural lens and think about where that fits into Bible prophecy. That is what I do every day.

This one is easy. We know from Revelation 6:7-8 that the 4th judgment of the tribulation will trigger an event that will kill 25% of the population of the earth. The prophecy does not mention a pandemic but the signs it does give: “to kill with sword, and with hunger, and with death, and with the beasts of the earth” could be a by-product of the worst virus ever recorded.

In 2015 the idea of biological warfare was taken to the next level by then-president of the Academy of Military Medical Sciences, He Fuchu, who argued in an essay that biotechnology would be the deciding factor in any future war. Biological warfare was not just permissible. It would be one of the keys to victory. The author subsequently became vice president of the PLA’s Academy of Military Sciences – the People’s Liberation Army’s highest level research institution. What began as an idea for a new approach to warfare had now become dogma. 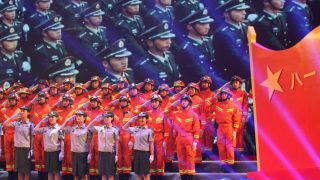 Independent Chinese media outlet Caixin Global revealed that Chinese laboratories had in fact identified a mystery virus — later identified as COVID-19 — to be a highly infectious new pathogen by late December 2019. But they were ordered to stop further testing, destroy samples, and suppress the news to the fullest extent possible.   The … Continue reading

Here’s the scary part. China and the nations east of Israel do not even show up in prophecy until Revelation 16:12, the 20th judgment leaving only one judgment left …

“And the sixth angel poured out his vial upon the great river Euphrates; and the water thereof was dried up, that the way of the kings of the east might be prepared.” Revelation 16:12

Using that Scriptural lens: is God using China to fulfill His decrees?