Argentina’s central bank raised its benchmark interest rate Thursday in a bid to prop up its currency and curb inflation nearing 100%.

The central bank boosted its benchmark Leliq rate by 5.5 percentage points to 75%, according to an emailed statement. The move comes a day after data showed consumer prices jumped nearly 79% a year in August, the fastest pace in 30 years. It was the bank’s ninth rate hike this year.

Third Seal: Scarcity on Earth: “When He opened the third seal, I heard the third living creature say, “Come and see.” So I looked, and behold, a black horse, and he who sat on it had a pair of scales in his hand.” Rev. 6:5 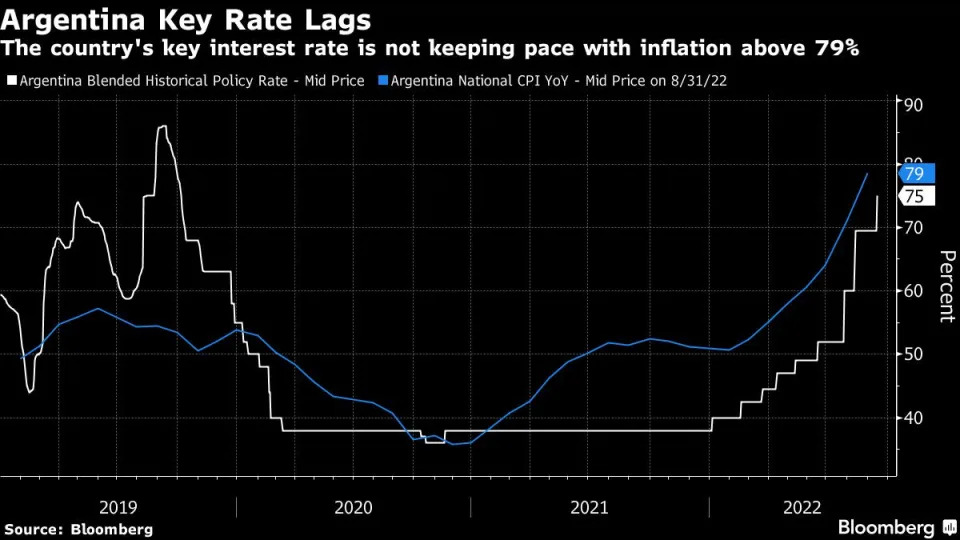 The bank’s board of directors also added in the statement that it intends to reduce the level of short-term debt held by the central bank next year, but didn’t provide more specifics.

Earlier this week, central bank President Miguel Pesce and Economy Minister Sergio Massa affirmed, in a meeting with International Monetary Fund Managing Director Kristalina Georgieva their commitment to implement the country’s $44 billion deal with the IMF. A key element of the accord includes keeping interest rates above the rate of inflation.

“The new rate hike catches up with the rise in current and expected inflation — but may not be sufficient to tame inflation or boost reserves. The substantial uncertainty on inflation and the persistent risk that the peso may soon see a sharper depreciation undermine the ability of the new rate to convince households to save or investors to have a position in pesos.”

“QE + Rate Hikes” This Is The Way To Lehman, Bubbles Or MMT

Bank Of England Capitulates: Restarts QE Due To “Significant Dysfunction” In Bond Market

BREAKING UPDATE: Footage emerges of Nord Stream leaks as sabotage not ruled out