Home anti-Semitism Belgian Carnival To Double Down On Antisemitic Displays 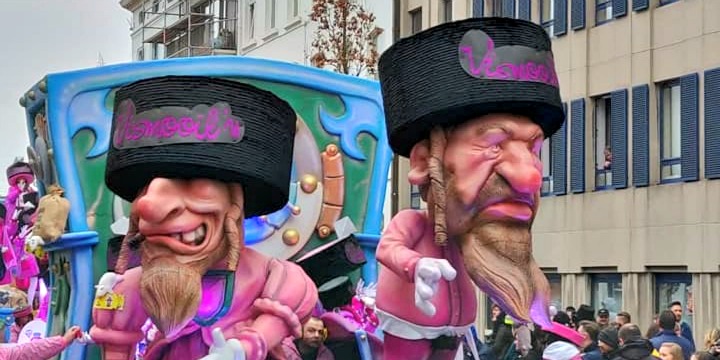 JPost: The annual carnival in Aalst, Belgium is expected to go as planned on Sunday, with even more antisemitic elements than in previous years.

Aalst’s organizers have sold hundreds of “rabbi kits” for carnival revelers, which take an active part in its parade, to dress up as hassids, which include oversize noses, payot and black hats. This is in addition to the plan to bring back floats similar to the one displayed in 2019, featuring oversized dolls of Jews with rats on their shoulders, holding money.

Foreign Minister Yisrael Katz said on Thursday that “Belgium as a Western democracy should be ashamed to allow such a vitriolic antisemitic display. I call upon the authorities there to condemn and ban this hateful parade in Aalst.” Read More …

Opinion: The carnival is a pre-lent tradition. Thanks to Belgium’s 52% Catholic population and replacement theology (here) anti-Semitism is just a big joke.

Despite God supposedly being finished with the Jews, one would think that Belgium would be sensitive to Jew hatred since the Fort Breendonk camp, best known for its role as a Nazi prison camp (Auffanglager) during the German occupation of Belgium during World War II, should serve as a constant reminder of Belgium’s role in the Holocaust.

When the time comes for Europe’s next Charlemagne to ride in on a white horse (Rev. 6:1-2) to unify the final empire (Daniel 7:24), Belgium will welcome him with open arms.