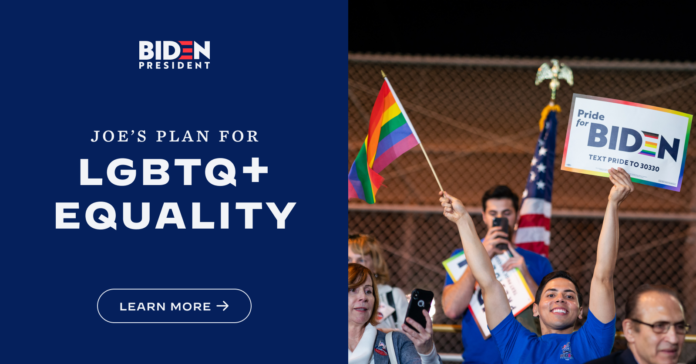 LEAD STORY President Biden’s ambitious LGBTQ agenda makes him the most pro-homosexual President ever Read Jimmy’s report on today’s top story, and how this event relates to Bible prophecy.

Dave James comes to Jimmy DeYoung’s Broadcast Table today on PTIB to discuss the pro-LGBTQ agenda for the Biden Administration. These are not the words of either Jimmy or Dave, but the words of the President Joe Biden. The Washington Post had a recent headline that stated “President Biden is set to be the most pro-LGBTQ President in history”. Jimmy and Dave will discus this issue and give you some Biblical passages, scripture that reveals God’s attitude on this issue.

JD: One thing that I’m concerned about is the pro-LGBT agenda that Biden is pushing.

DJ: On January 11th before the inauguration the Washington Post ran an article with the title, “Biden’s ambitious LGBT agenda poise him to be nations most pro-equality President in history.” The article says Joe Biden became a fast friend of the LGBTQ community as Vice President in 2012 by stating his support for same sex marriage even before the President did. In that same year outside an Obama-Biden campaign office in Florida it was Biden’s unexpected support for the transgender community that elevated his status from a LGBTQ ally to a champion.

On the Joebiden.com website on the LGBT page you can find this statement, “this fight is not over, Donald Trump and Mike Pence have given hate against LGBTQ Plus individuals and rolled back critical protections for the LGBTQ Plus community.”

JD: What are a few of the arguments that are used by those to try to Biblically defend homosexuality and how do you respond to them?

DJ: There continues to be growing support for the LGBT agenda within evangelicalism especially by those under 35. One is that the Bible doesn’t condemn loving relationships between people of the same sex but Jimmy that’s not true. The Bible doesn’t deal with the why question but consistently condemns homosexual behavior out right in the strongest possible terms in both the Old and the New Testament. The greek term explicitly means man that has sex with a man. I Corinthians 6:9-11 says this, do not deceive either fornicators, nor idolaters, nor adulterers, nor homosexuals, nor sodomites will inherit the kingdom of God.

JD: David James explaining why even the Washington Post headline agrees with Prophecy Today that President Biden is set to be the most LGBTQ President ever.

For my prophetic prospective on this headline I will simply turn to the Bible for God’s prophetic prospective. Genesis 19 God destroys Sodom and Gomorrah for sodomy. Romans 1:28 God turns his back on this type of activity. In a message from Jesus Christ, Luke 17 starting in verse 28 Jesus reveals that at the time of His return to the earth it will be at the times of Lot, homosexuality prevalent in our world.