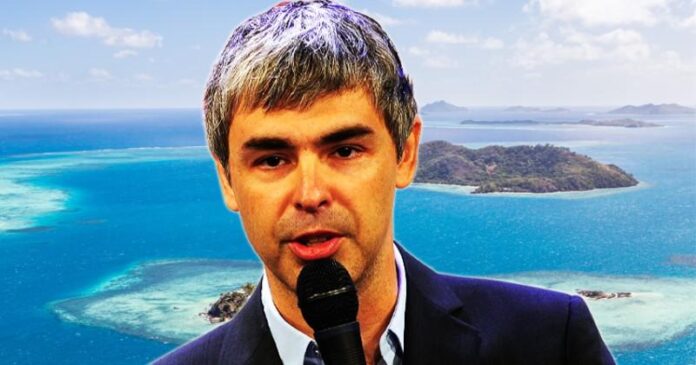 Zero Hedge: News that billionaire Google co-founder Larry Page has been hiding out on and buying isolated private islands in Fiji to avoid tourists who aren’t allowed in, once again underscores how the elite is using the fallout from the pandemic to segregate themselves from the general public.

Page has been living off grid for over a year and forced a state-owned news website to remove an article about his activities that was also de-listed by Google in an apparent effort to conceal his location.

“He has spent months in Fiji during the coronavirus pandemic – mostly on the island of Tavarua – and it has been rumored the billionaire has bought at least one island in the country’s Mamanuca archipelago,” reports the Daily Mail.

“Page has also been spotted on a smaller island called Namotu – which a sailor named Lorenzo Cipriani claimed Page bought in a blog post in August.”

Page, who has a net worth of $117 billion, making him the sixth-wealthiest person in the world, was able to take advantage of Fiji’s ‘Blue Lane’ program, which “lets the super wealthy visit the archipelago on their superyachts and private jets, even when other travelers were banned.”

So while Page gets to enjoy a sumptuous view of the South Pacific while being attended to on his luxury private island by 30 staff waiting on him, ordinary people who have lost their jobs, businesses and homes due to the lockdown aren’t even allowed to travel there. Read More …

Opinion: I love it when Bible prophecy comes to life.

The final line of Revelation 6:5-6 “and do not harm the oil and the wine.” is a message concerning the billionaires of the world. Here’s my take on why:

The scene is just after the opening of the 7 year tribulation period found in Revelation 6:1-8. The Antichrist has arrived (White Horse) on the scene as a peace maker, and possibly as a member of a ruling party in the newly revived European Union. His ideas will impress the masses and the world will begin to follow his leadership.

There will an unusual outbreak of wars and rumors of war (Red Horse), but at this point a fallen world will be enthralled by this new leader.

The first sign of trouble will come with the Black Horse, when a currency collapse of one or more world powers plunge the world into hyperinflation.

“A quart of wheat, representing one person’s food for the day, will cost a day’s wages. But many will be forced to buy barley, a less expensive food usually used for animals. Three quarts of barley will also cost a denarius, but only the 1% will still be able to afford the luxury of oil and wine.”

Larry Page and the 1% will barely notice the pain.

See more in our paper “The 1% and Revelation: “Do Not Harm the Oil and Wine” HERE