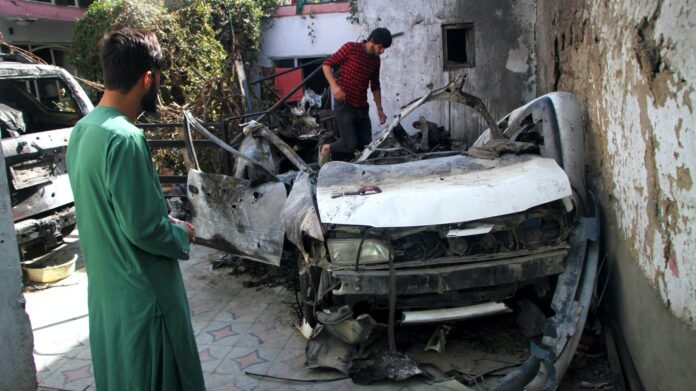 Zero Hedge: President Joe Biden murdered an innocent family when the US military conducted a “righteous strike” on Aug. 29 against a vehicle that American officials thought was an ISIS bomb that posed an imminent threat to thousands of people at the Kabul airport.

In a late Friday afternoon report, the New York Times reveals that “Military officials said they did not know the identity of the car’s driver when the drone fired, but deemed him suspicious because of how they interpreted his activities that day, saying that he possibly visited an ISIS safe house and, at one point, loaded what they thought could be explosives into the car.”

In reality, they were filling water bottles.

They were filling water bottles

And their entire family was murdered so Joe Biden could get a headline pic.twitter.com/kSXn0cbW3d

More via the New York Times:

Times reporting has identified the driver as Zemari Ahmadi, a longtime worker for a U.S. aid group. The evidence, including extensive interviews with family members, co-workers and witnesses, suggests that his travels that day actually involved transporting colleagues to and from work. And an analysis of video feeds showed that what the military may have seen was Mr. Ahmadi and a colleague loading canisters of water into his trunk to bring home to his family.

While the U.S. military said the drone strike might have killed three civilians, Times reporting shows that it killed 10, including seven children, in a dense residential block.

Mr. Ahmadi, 43, had worked since 2006 as an electrical engineer for Nutrition and Education International, a California-based aid and lobbying group. The morning of the strike, Mr. Ahmadi’s boss called from the office at around 8:45 a.m., and asked him to pick up his laptop.

Milley lied. He murdered a US ally and his entire family.