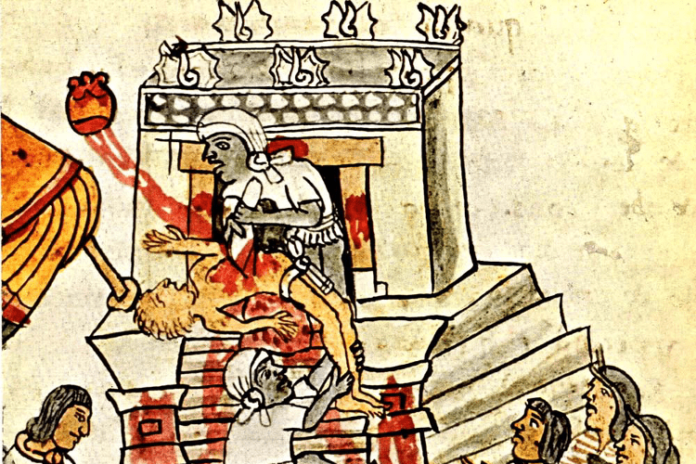 The New American: Five hundred years ago, Aztec priests would cut victims’ still-beating hearts from their chests, then toss their lifeless bodies down the steps of a temple that was flanked by towers made entirely of human skulls. Now educators in California, further cutting the heart from our culture, think that worship chants from those priests’ religion should be taught in government schools.

It’s the latest example of how our thought police, who take pains to cancel Dr. Seuss and amorous cartoon skunks, apparently have some odd priorities. As the New York Post reports:

The California Department of Education has proposed an ethnic studies “model curriculum” that includes, among other things, chanting the names of Aztec gods in an attempt to build unity among schoolchildren.

“But whoever causes one of these little ones who believe in Me to sin, it would be better for him if a millstone were hung around his neck, and he were drowned in the depth of the sea.” Matthew 18:6

The chant starts with a declaration that “you are my other me” and “if I do harm to you, I do harm to myself.” Before chanting the name of the Aztec god Tezkatlipoka, the text reads: “Seeking the roots of the truth, seeking the truth of the roots, elders and us youth, (youth), critical thinking through.” Tezkatlipoka is the name of an Aztec god that was honored with human sacrifice.

In Aztec mythology, Tezkatlipoka is the brother of Quetzalcoatl, Huizilopochtli and Xipe Totec — all of whom appear to be invoked in the proposed chant.

Quetzalcoatl, do note, was a feathered serpent “god” in whose name much blood was shed.

So I guess California leftists really do believe in the separation of church and state — literally. But separation of pagan temple (or mosque) and state is a different matter. Read More