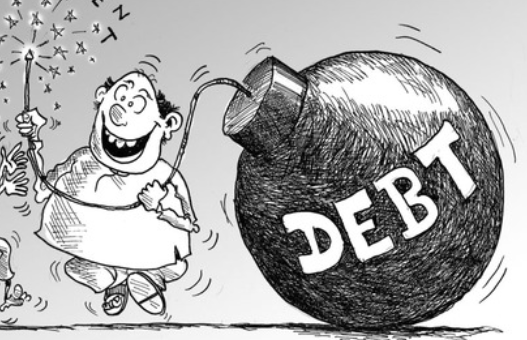 Zero Hedge: Once the global debt bomb explodes, there won’t be much left for anyone.  Governments will fall, individuals will be impoverished, and businesses will implode.  The elitists in power have tried to keep everyone in the dark, but maybe there’s an answer to this devastation.

Global debt now stands at a terrifying $243 trillion according to a report by the Institute of International Finance this week. That’s quarter of a quadrillion. We’re in the realms of the absurd and the unsustainable. That’s money that will never be repaid. The debt-based system is irrevocably broken and is still propped up by the lies told by central bankers and governments in order to remain in positions of power over others.

The record debt figure stands at three-times the world’s total gross domestic product (GDP). In other words, it’s three times larger than the value of all products and services on the planet

And the United States is contributing massively to this problem, propping up a debt bubble that will crush everyone when it finally bursts. It’s pretty safe to say that if you aren’t concerned, you simply aren’t paying attention and will be hurt when it all collapses.

An irresponsible monetary system addicted to printing money and issuing credit is destroying the standard of living almost everywhere on the planet.  more …

Opinion: For anyone who has visited the ark (Ark Encounter) in Kentucky, one of the most interesting aspects are the food bins and water storage vessels. These supplies would have to feed 8 adults and about 1400 kinds (two of every kind) of animal that would inhabit the ark for one year.

Noah and his family would have been in and out of the ark, building cages, storing provisions and loading animals drawing a parallel to Daniel 9:27 and the last 7 years prior to the tribulation.

The most important question ever asked “What must I do to be saved” was from a Roman jailer to Paul and Silas who were in prison for their crime of following Jesus. The most important answer ever given “Believe on the Lord Jesus Christ and you will be saved you and your household” (Acts 16:30-31).