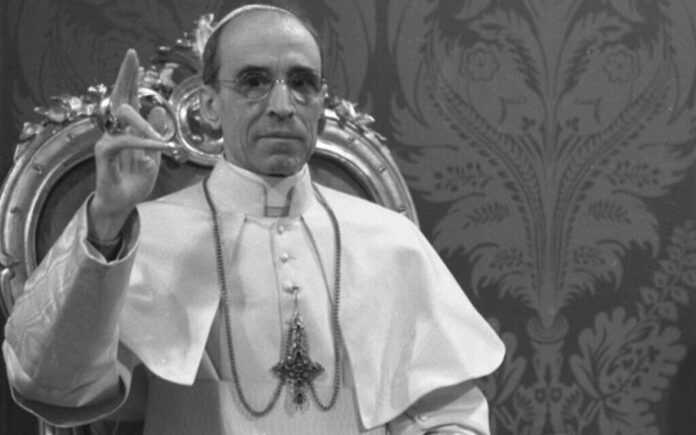 Israel 365: Due to the Vatican’s silence during the Holocaust, Pope Pius XII has been dubbed ‘Hitler’s Pope’. A new attempt by Catholic media to rewrite history falls short, serving rather to highlight that the Pontiff knew all about the Nazi death camps and did far too little to minimize the genocide carried out against the Jewish People.

CATHOLIC MEDIA CLAIMS THE POPE WORKED TO SAVE ITALY’S JEWS

The pro-Israel blogger Elder of Ziyon posted about recent articles in the Catholic media which are trying to portray the role of Pope Pius XII in the Holocaust in a positive light. EOZ cited an article in The Catholic News Agency published last week titled, “Expert’s latest investigation dispels myths about Pius XII and Rome’s Jews.” The article cited the conclusions of a series of investigations on archive material carried out by Deacon Dominiek Oversteyns, of the Spiritual Family “The Work” who studied public archives documenting the fate of the Jews in Italy during the Holocaust.

Pius XII was also able to help 152 Jews hidden in private homes under the protection of DELASEM, the Delegation for the Assistance of Jewish Emigrants. In all, Pius XII gave support to some 714 Jews. Read More …

Opinion: Pope Francis opened the secret Vatican archives on Pope Pius XII on March 2, 2020. It is a long awaited move, as controversy has swirled for decades over Pius XII’s lack of action to save Jewish lives during the Holocaust. Indeed, the canonization of Pius XII has been delayed – if not totally derailed — due to questions about his reluctance to use the Church’s moral influence during this dark period.

“The Church is not afraid of history,” proclaimed Pope Francis in his official announcement of the archives’ scheduled opening.

Unfortunately, he should be. Damning statements about Jewish people and the Holocaust have plagued the Catholic Church since the time of John Chrysostom (Patriarch of Constantinople) and Augustine 400 AD:

(Saint) John Chrysostom held Jews responsible for the crucifixion of Jesus and of deicide (killing God) and added “the synagogue is a place worse than a brothel and a drinking shop; it was a den of scoundrels, the repair of wild beasts, a temple of demons, the refuge of brigands and debauchees, and the cavern of devils, a criminal assembly of the assassins of Christ.”

(Saint) Augustine “Judaism, since Christ, is a corruption; indeed, Judas is the image of the Jewish people: their understanding of Scripture is carnal; they bear the guilt for the death of the Savior, for through their fathers they have killed Christ.”

Anti-Semitism of the early church can also be found 1100 years later in the writings of Martin Luther, a Catholic priest:

In 1543 Luther published his infamous paper “On the Jews and Their Lies” among many anti-Semitic statements: “an idle and lazy people, such a useless, evil, pernicious people, such blasphemous enemies of God.”

From the Article: Prior to his Papacy then Cardinal Pacelli made official anti-Semitic statements, referring to Jews as those “whose lips curse [Jesus] and whose hearts reject him even today.”

“I do not want you to be ignorant of this mystery, brothers and sisters, so that you may not be conceited: Israel has experienced a hardening in part until the full number of the Gentiles has come in, 26 and in this way all Israel will be saved. As it is written:

“The deliverer will come from Zion;
he will turn godlessness away from Jacob.
27 And this is my covenant with them
when I take away their sins.”

See our paper: Two Trains: Israel and the Church in Prophecy HERE