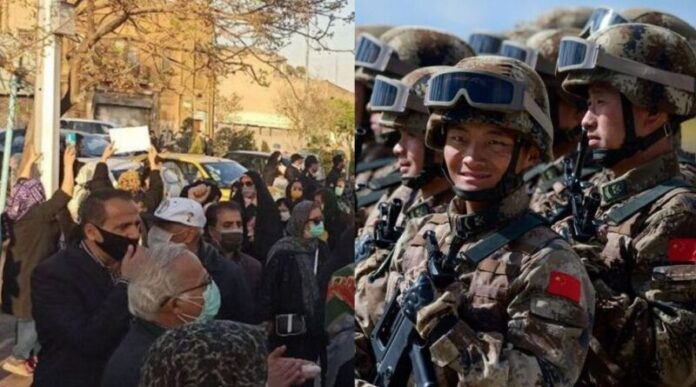 Debkafile: Beijing is preparing to transfer 5,000 Chinese troops to Iran to guard its $400bn investment in the country over the next 25 years. Military engineers are prospecting sites for their bases. This deployment was covered in the investment-cum-strategic accord signed in Tehran on March 27 by visiting Chinese FM Wang Yi and his Iranian counterpart Mohammed Javad Zarif.

Gulf and the Western intelligence sources report that this substantial Chinese military presence in Iran, the first in the Gulf region, will mark out the formation of a strategic axis linking China, Iran and Pakistan, two of which are nuclear powers. It will add another section to the the CPEC [China-Pakistan Economic Corridor] project underway in Pakistan, as part of Beijing’s $8 trillion Border and Road Initiative (BRI) projects for spanning Asia and Europe. The CPEC is to provide a safe passage and a shorter route for Iranian oil, gas and petrochemicals, sold at cut-rate prices, to reach China.

The 5,000 Chinese troops to be posted in Iran, DEBKAfile sources reveal, will join the rarely noticed presence of 10,000 Chinese military personnel in the east African port of Djibouti,, so topping up Beijing’s military strength athwart more than one sensitive corner of the Middle East to 15,000 troops. Read More…

Opinion: Bible quiz: What do Iran, Pakistan and China have in common?

Everyone who said D got it right.

In the Russian led war to eliminate the Jewish people that precedes Revelation 16, Ezekiel 39:3-6 is clear that the attacking alliance including Iran, Turkey and at least 4 North African nations are wiped out.

“I will strike your bow from your left hand and make your arrows drop from your right hand. 4 On the mountains of Israel you will fall, you and all your troops and the nations with you. I will give you as food to all kinds of carrion birds and to the wild animals. 5 You will fall in the open field, for I have spoken, declares the Sovereign Lord. 6 I will send fire on Magog and on those who live in safety in the coastlands, and they will know that I am the Lord.”

This report of Chinese forces in Iran offers an interesting prophetic clue.

In the final war of this age these kings of the east will make their way to Jerusalem thanks to the Euphrates river being dried up. They will join up under Satan to stop the returning Messiah who comes back to the Mount of Olives:

“And in that day His feet will stand on the Mount of Olives,
Which faces Jerusalem on the east.” Zechariah 14:4