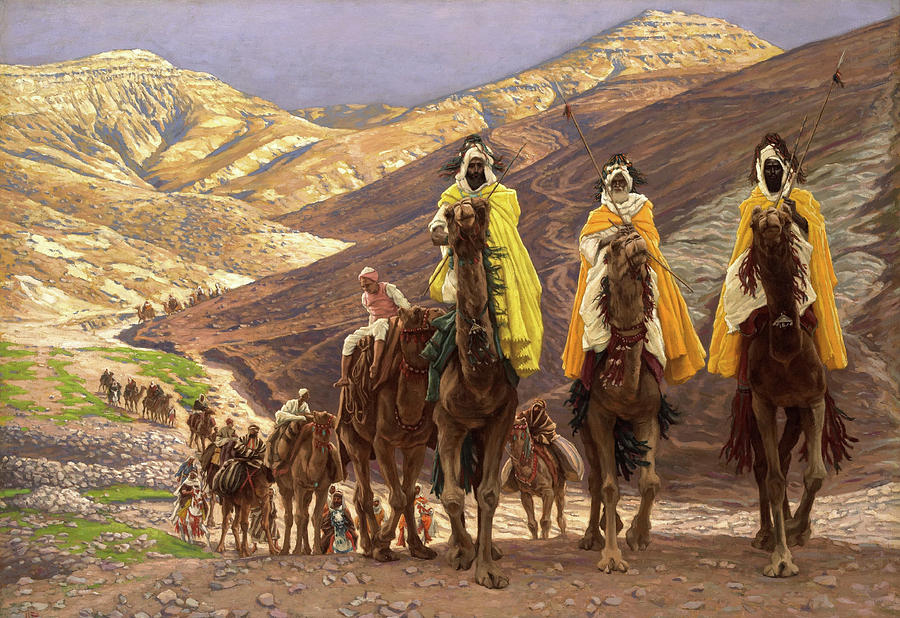 “Now after Jesus was born in Bethlehem of Judea in the days of Herod the king, behold, magi from the east arrived in Jerusalem.”

The story of the Magi has been told for 2000 years. They were called ‘wise men’ because of their knowledge of astrology, science, math, history, agriculture, and the occult. It is from their name that our words magic and magician are derived.

The Magi first appear in the Bible in the 6th century BC as a tribe within the Median nation in eastern Mesopotamia (Iraq, Syria, Lebanon, Israel) called Parthia. We are told that these wise men came from the east (of Israel).

Tradition holds that there was a great company of these priests that traveled together since journeying 900+ miles by camel while carrying great wealth would be a dangerous journey.

The prophet Daniel tells us that the Magi were among the highest-ranking officials in Babylon.

In 586 BC, the Israelites were taken captive by the Babylonian king Nebuchadnezzar. One of the princes of Israel was a young man named Daniel who found favor with the king. In chapter 2 of Daniel’s book, we are told the story of Nebuchadnezzar’s dream.

The king was greatly disturbed by the dream and summoned his magicians, astrologers and wise men (who were especially noted for their ability to interpret dreams).

The king not only wanted his dream interpreted, but wanted them to tell him what the dream was.

None of the king’s men could do as the king asked: “There is no one on earth who can do what the king asks! No king, however great and mighty, has ever asked such a thing of any magician or enchanter or astrologer” Daniel 2:10-11.

The king was enraged and ordered all the wise men put to death.

When Daniel was told of the harsh order, he prayed to God and said to the executioner “Do not execute the wise men of Babylon. Take me to the king, and I will interpret his dream for him.”

After Daniel told the king his dream and interpreted it, the king fell prostrate before Daniel and gave him wealth (gold) and incense. Needless to say, the wise men were grateful to young Daniel for saving their lives and they became a devoted group of students and advisors who were both wise and spiritual.

Fast forward to the end of this 70 year period of captivity. Daniel, now an old man, was praying to God for the release of his people. Reading the book of Jeremiah 29:10, he realized the captivity was soon coming to an end.

While praying, Daniel was visited by the Angel Gabriel and given a message that contains four of the most exciting verses in prophetic scripture.

Daniel 9:24-27 reveals the prophecies shared with the wise men from the time of the Savior’s arrival to the end of the age

With no disruption to the harmony and order of the heavenly bodies, the King of the universe installed a special star in the cosmos to fulfill the prophecy. The wise men were surely searching the skies fervently since they knew, from Gabriel’s teachings to Daniel, that the King’s presence was approaching. Allowing time to confirm the sign of the star, make preparations to leave and then travel 900 miles they could have arrived in Jerusalem as much as a year or two later. Hence the execution of all the boys in Bethlehem 2 years old and younger.

The wise men leave for Jerusalem:

Matthew 2:2-3: “Where is He who has been born King of the Jews? For we saw His star in the east, and have come to worship Him. When Herod the king heard this, he was troubled, and all Jerusalem with him”.

“Herod was an Edomite, enmity to Israel was bred in the bone with him” Matthew Henry.

Herod was half-Jewish and was descended from Abraham through Isaac and Esau rather than through Isaac and Jacob. Herod and family were considered to be Idumeans; this was a term employed by the Greeks and Romans for the country of Edom, or southern Israel south of Judea.

(Ancient Edom was located in the area of southern Jordan or Mount Seir (modern-day Petra). It is specifically noted as the place where Esau had made his home (Genesis 36:8; Joshua 24:4).

As is typical of the descendants of Esau, both then and now, Herod showed no mercy to the Israelites.

Matthew 2:4-5 “And when he had gathered all the chief priests and scribes of the people together, he inquired of them where the Christ was to be born. So they said to him, “In Bethlehem of Judea, for thus it is written by the prophet” (Micah 5:2).

Herod sent the Magi to Bethlehem in search of the child, hoping through them to learn of His whereabouts himself (Matthew 2:5-8). Guided by the star, the Magi came to the place where Jesus, Mary and Joseph were staying.

Matthew 2:9-12: “When they heard the king, they departed; and behold, the star which they had seen in the East went before them, till it came and stood over were the young Child was.

Tradition holds that the three gifts for the Christ child originally came from Daniel and had been passed down through generations of wise men for 500 years:

“Then, being divinely warned in a dream that they should not return to Herod, they departed for their own country another way.“