Oil Price: Russia’s invasion of Ukraine has caused plenty of analysts to worry about the future of global financial and energy markets, but there is a major consequence being overlooked.

The ongoing military Russian onslaught on Ukraine is reverberating across commodity markets. Crude oil prices are spiking while natural gas markets are in crisis mode. The importance of Russia in European energy markets has been highlighted in recent weeks, revealing the extent of European dependence on Russian oil and gas imports.

Some analysts have already started assessing how the loss of Ukraine’s agricultural exports, especially corn, wheat, sunflower oil, and rapeseed oil will impact markets. A combination of higher energy prices, disrupted food supplies, and fewer tourists could be a poisonous mix for the stability of the main power centers of OPEC (Saudi Arabia, UAE, Libya, and even Iraq) and for pivotal regional powers such as Egypt, Israel, and even Turkey.

While several countries in the region are attempting to stay neutral over Russia’s invasion of Ukraine, the economic realities of the invasion cannot be avoided. Read More …

Opinion: MENA is an English-language acronym referring to the Middle East and North Africa. Another Arab Spring, should it happen, will put Israel and a vast amount of natural gas and oil in the cross-hairs. 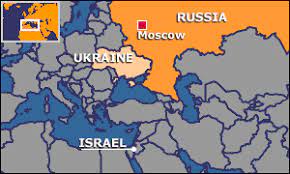 The nagging question is, why did Vladimir Putin choose last Thursday to announce that Russia does not support Israeli sovereignty over the Golan Heights nor Jerusalem? Is Ukraine a trial run or possible staging area for a Russian Israeli invasion, as Pat Robertson suggests (source)?

Keep in mind that Russia has a major air base in Syria. Bashar Assad, Syria’s president, was the first world leader to recognize and support Russia’s assault on Ukraine.

“After many days you will be called to arms. In future years you will invade a land that has recovered from war, whose people were gathered from many nations to the mountains of Israel, which had long been desolate. They had been brought out from the nations, and now all of them live in safety. You and all your troops and the many nations with you will go up, advancing like a storm; you will be like a cloud covering the land.”

Ezekiel 38:8-9 presents a glaring obstacle to a Russian-led invasion at this time. At some point, Israel will be victorious in a war so significant that the Jewish state will afterwards be living in peace, although it’s a false peace. There is one unfulfilled prophecy that fits that scenario.

Psalm 83 pinpoints such a war with uncanny details, and a second Arab Spring, sponsored by Russia, Turkey and Iran just might be the catalyst.

“For they have consulted together with one consent;
They form a confederacy against You:
6 The tents of Edom and the Ishmaelites;
Moab and the Hagrites;
7 Gebal, Ammon, and Amalek;
Philistia with the inhabitants of Tyre;
8 Assyria also has joined with them;
They have helped the children of Lot.” Psalm 83:5-8

The attackers as they are called today:

The tents of Edom – (Edom is Esau Gen 36:1). Edom today is represented by the Palestinians of the West Bank.

“May they ever be ashamed and dismayed; may they perish in disgrace. Let them know that you, whose name is the Lord—that you alone are the Most High over all the earth” Psalm 83:17-18

With Israel’s neighbors wiped out, Russia’s prince will devise an evil scheme:

“This is what the Sovereign Lord says: On that day thoughts will come into your mind and you will devise an evil scheme. You will say, “I will invade a land of unwalled villages; I will attack a peaceful and unsuspecting people—all of them living without walls and without gates and bars.” Ezekiel 38:10-11