Breitbart: What is one to make of Germany’s love affair with Iran?

For example, after President Donald Trump walked away from the Joint Comprehensive Plan of Action (JCPOA), otherwise known as the Iran nuclear deal, last May, the EU responded harshly.

Brussels refused U.S. calls to join America in abandoning the deal that paves the way for Iran to develop a nuclear arsenal, and which funds its terrorism and aggression throughout the Middle East and world. The EU’s “big three,” Germany, France and Britain, spent months putting together a financial vehicle to sidestep U.S. economic sanctions on Iran. They instructed European firms to defy U.S. sanctions and maintain their economic operations in Iran.

In other words, rather than siding with their most powerful and important ally – the United States of America – in its efforts to forge a policy vis-à-vis Iran that actually diminishes the threat the regime poses to global security and stability, the Europeans – led by Germany — have stood with Iran against the United States. more …

Opinion: For context on German and Iranian anti-Semitism we need to go back to the 6th century BC Persian Empire and the origin of the term Aryan: 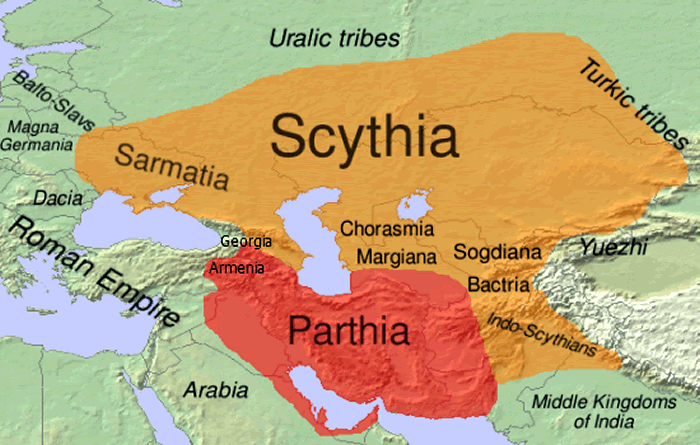 Aryan is a Persian word, not German, from which we get Iran. Modern day Persians descended from the Parthians. Persians are considered Caucasian.

Parthians are prominent in Daniel 2:5-6 as the wise men who were saved by Daniel when King Nebuchadnezzar demanded that a disturbing dream and its meaning be made known to him or be cut to pieces. Daniel became their mentor, teaching them the exact time of Messiah’s arrival (Daniel 9:24-27) on a colt in Jerusalem, that would take place 500 years into the future.

Before his death in 530 BC, a Persian king named Cyrus, who had been prophesied by name 150 years before his birth (Isaiah 45:10), freed the Jews from captivity to go back to Jerusalem to build their temple.

Persia (modern day Iran) was on the side of the Allies in WWI and helped to fight the Ottoman empire. The Iranian government itself kept its 3,000-year-old Jewish community out of Nazi reach. In the 2005 presidential election, Mahmoud  Ahmadinejad, a radically conservative veteran of the Revolutionary Guards, quickly became a confrontational presence.

Standing aside a banner that read “The World Without Zionism,” he whipped up a crowd of 4,000 students at an October 2005 conference in Tehran. “Our dear Imam ordered that the occupying regime in Al Quds be wiped off the face of the earth,” Ahmadinejad declared, referring to the late Ayatollah Khomeini and using the Arabic name for Jerusalem. “Anyone who would recognize this state has put his signature under the defeat of the Islamic world.”

Iran wanted Jerusalem (Zechariah 12:3) and taking the Arab Palestinian side would help them get it.

Persians make up around two-thirds of Iran’s population. Germans and modern Persians are sort of cousin civilizations, just like all other European civilizations are to Persians. Aryan became associated with Germany when Adolf Hitler described Germans as the Aryan race that was superior to all others.

From 1939 to 1941, Iran’s top foreign trade partner (nearly 50% of its total trade) was Germany. Both nations collapsed after WWII.

On March 8, 2019, Germany refused to designate Hezbollah as a terror organization.

Thanks to Steve for sending in this article