Home anti-Semitism How Natural Gas Changed Everything For Israel

Oil Price: The Mediterranean is about to become an even bigger fossil fuels minefield in the coming weeks as Israel has ratified the underwater pipeline project that will bring its game-changing natural gas to Europe.

This means the controversial pipeline–the one that could shut Turkey out of the European gas game–will now go through, barring any major incidents along the way. Greece and Cyprus had already ratified the project.

The implications are that Israel will certainly become a net exporter, and for the first time in history it is a major energy player, which completely changes the geopolitical dynamics of the region and beyond. (It will also change again when the low-carbon bug truly takes over the industry, and when renewable energy rather than oil is what turns into geopolitical leverage–but we’re not there, yet).  Read More …

Opinion: The headline could read …

“The word of the Lord came to me: 2 “Son of man, set your face against Gog, of the land of Magog, the chief prince of Meshek and Tubal; prophesy against him 3 and say: ‘This is what the Sovereign Lord says: I am against you, Gog, chief prince of Meshek and Tubal. 4 I will turn you around, put hooks in your jaws and bring you out with your whole army—your horses, your horsemen fully armed, and a great horde with large and small shields, all of them brandishing their swords.” Ezekiel 38:1-4 NIV

The Gog Magog alliance is pulled into conflict (hooks in Jaws) with Israel. The leader of the alliance, Gog, most likely a Russian prince, knows the danger of Israel’s still unknown nuclear capability. War will be costly, but 40% of Russia’s economy depends on natural gas sales to Europe, and upstart Israel cannot be allowed to disrupt the flow.

Bringing in Turkey (Gomer) and its alliance with North Africa (Cush/Put) will be a piece of cake now that anti-Semitism has overcome its leaders. And as for Iran (Persia), the former abode of Haman, Gog will not have to ask twice. 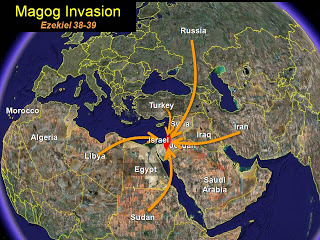 It is interesting how much Biblical prophecy revolves around economics…

Thanks to VS for sending this headline in.