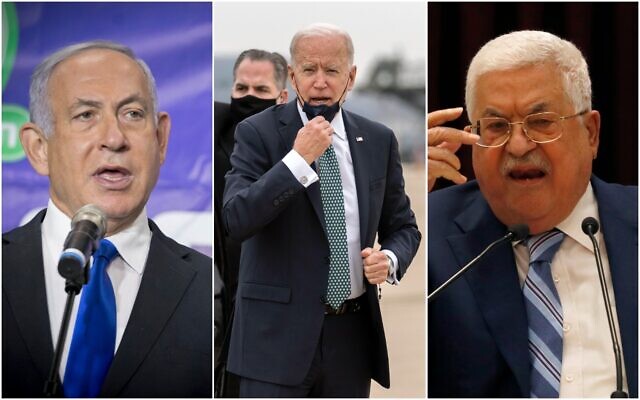 Times of Israel: The Biden administration will reportedly push for a two-state solution based on the pre-1967 lines, with mutually agreed upon land swaps, reinstating US policy on the Israeli-Palestinian conflict to more traditionally held positions than those of former president Donald Trump.

A memo titled “The US Palestinian Reset and the Path Forward,” which was revealed Wednesday to the Abu Dhabi-based The National, also showed that the Biden administration is planning on announcing a $15 million aid package in coronavirus-related humanitarian assistance for the Palestinians as early as this month.

Drafted by Deputy Assistant Secretary for Israeli and Palestinian Affairs Hady Amr, the memo also details plans to roll back various Trump policies that Washington believes made reaching a two-state solution more difficult, such as US legitimization of the settlement enterprise. Read More …

Opinion: The dream of the secular progressive left is for Israel to return to the 1967 borders, a move that would render the Jewish state vulnerable to attack.

Israel’s victorious Six Day War of 1967 provided the nation with land previously mandated to it by the 1917 Balfour Declaration. From 1917 to 1947, Britain repeatedly made concessions to the Arabs handing them control of the West Bank (Temple Mount), the Sinai, the Gaza Strip and the Golan Heights.

In the Six Day War, Israel regained these natural God-made buffers which protect the Jewish state from annihilation. Since then, the UN has demanded that Israel give them back, i.e. “the 1967 borders”.

In exchange for peace that never came, Israel gave back control of the Temple Mount, the Sinai, and the Gaza Strip and parts of Judea and Samaria but has refused to hand over the Golan Heights, the most strategic buffer that was deemed Israeli territory by President Donald Trump.

If/when the deal is attempted, expect the Arab side to also demand the right of return of 5-13 million so-called refugees. If/when Israel declines and the deal falls apart, the stage will be set for war.

They have said, “Come, and let us cut them off from being a nation, That the name of Israel may be remembered no more. With one mind they plot together; they form an alliance against you” Psalm 83:1-4

This 3000 year old Psalm 83 prophecy lists each nation in the confederacy by its ancient name and is a logical precursor to the much larger Russian-led Gog Magog invasion when Israel is living in a false peace (Ezekiel 38:8 NIV).